Approximately 350,000 people climb and bag Snowdon, the highest mountain in Wales, every year. The name Snowdon comes from the Saxon Snow Dun (Snow Hill). The Welsh name for the mountain is Yr Wyddfa (loosely pronounced 'ur-oo-ith-va') which means 'The Burial Place'.

Northern Snowdonia is the only place in the UK that you can find the Snowdon Lily (Gagea Serontina) - an Artic-alpine plant. It flowers from June onwards and has white flowers with purple or reddish veins.

In 2004 the Independent Newspaper reported that Crib Goch near Snowdon is the wettest place in the United Kingdom with an average rainfall of 4,473 millimetres per year over the previous 30 years. That is 176.1 inches or over 14.5 feet! Better take a waterproof.

Snowdonia in Welsh is Eryri (loosely pronounced 'error_ree') which means 'The Highland'. 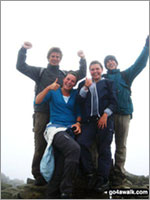 There are 240 classified Mountains, Fells, Peak, Tops and Hills that lie within the boundary of Snowdonia National Park National Park. All are within the capabilities of an averagely fit walker, hiker or rambler.

To make your peak bagging records easier to manage, we have divided Snowdonia National Park into ten distinct areas which are listed below.

If you want to see all 240 classified Mountains, Fells, Peak, Tops and Hills in one go see The Whole of Snowdonia National Park but please bear in mind that the page may take a few extra seconds to load due to the amount of data being downloaded to your computer.