Often referred to as 'The Lakes' or 'Lakeland', The Lake District is mountainous region renowned for the beauty of its forests, lake and mountains. Covering and area of 2,362 km² (912 sq mi), The Lake District is the second largest National Park in the UK (after the Cairgorms in Scotland) and the most visited.

It is home to the highest mountain in England - Scafell Pike; the deepest lake - Wast Water; the longest body of water - Windermere and the wettest inhabited place in England - Seathwaite in Borrowdale with an average of 3,300 mm of rain per year. That's 130 inches or nearly 11 feet! And nearby uninhabited Sprinkling Tarn is even wetter with over 5,000 mm, 200 inches or over 16 feet of rain per year. 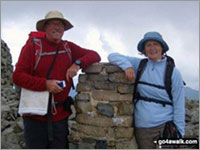 The Lake District is also home to the majority of the red squirrels in England along with red deer, fell ponies, Herdwick sheep, osprey and red kite. The last golden eagle hasn't been seen since 2015.

There are 433 classified Mountains, Fells, Peak, Tops and Hills that lie within the boundary of The Lake District National Park National Park. All are within the capabilities of an averagely fit walker, hiker or rambler except Pillar Rock which is a grade three scramble/easy rock climb, very exposed and a rope is recommended.

To make your peak bagging records easier to manage, we have divided The Lake District National Park into eleven distinct areas which are listed below.

To first seven areas are where all the big mountains are and correspond to the 7 volumes of Pictorial Guides created by Alfred Wainwright in the late 1960s. The other four areas include the majority of the Outlying Fells detailed in Wainwright's 1974 book "The Outlying Fells of Lakeland".

If you want to see all 433 classified Mountains, Fells, Peak, Tops and Hills in one go see The Whole of The Lake District National Park but please bear in mind that the page may take a few extra seconds to load due to the amount of data being downloaded to your computer.