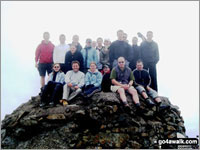 Another busy day on Ben Nevis

What do three of our iconic mountain peaks - Mount Snowdon, Scafell Pike and Ben Nevis - have in common with Jordan's Wadi Rum valley and the Coruh River in Turkey?

The answer is that they all feature on the latest list of endangered destinations published recently by travel magazine Wanderlust.

Whilst this at first may seem rather surprising, it's perhaps not so given the popularity of these mountains amongst walkers generally. The National Trust estimate that 500,000 people climb to the top of Snowdon (Yr Wyddfa) every year.

In recent years, though, the appeal has widened as they've become destinations in many charity walks such as the Three Peaks Challenge. And it's this, suggest Wanderlust, that is having the greatest impact on the mountains:

Concern about the impact of challenges such as the Three Peaks has been voiced for a number of years. In October 2009, BBC Radio 4's series 'Costing the Earth, featured a programme that looked at one such event from the perspective of a participant, a charity sponsor/event organiser, representatives from National Park Authorities, the National Trust, Mountain Rescue Teams .... and the local communities.

These events are sources of personal challenge as well as highly successful fundraisers - the charity featured in the Radio 4 discussion expected to make £75,000 from just one such event. Clearly these achievements are important for the individuals and for the rest of us who potentially benefit from the work of the charities concerned.

However there needs to be some way of balancing these benefits with the true 'costs' of these events.

There is significant disruption to the local communities - particularly those living in the Wasdale Valley close to Scafell Pike which is normally tackled in the middle of the night. During the challenge 'season', local estimates suggest that 600 people may be in the area every night.

The Lake District National Park Authority estimate that some paths are used by approximately 26,000 people per month. Not all these walkers are participating in charity events but 60,000 do take part in the Three Peaks Challenge every year - so this must contribute significantly to the peat erosion and disruption to flora & fauna. A frustration expressed by many who work in conservation is that the sheer volume of people on these paths mean that work often has to be repeated meaning of course that new requirements can not be tackled.

And inevitably there is an increase in the demands placed on local Mountain Rescue Teams. The Wasdale team estimate that 20 per cent of its annual call-outs are to challenge participants - sometimes these callouts are not to assist with accidents but to effectively 'guide' people down the mountain.

So - are there any solutions to this?

There is apparently a code-of-practice about the running of such events. One of the requirements of this is that groups be restricted to 200 (two hundred). Is this always complied with?

Others have suggested that, as far as the Three Peaks Challenge is concerned, it is the time limit that is the main problem - encouraging as it does the night time walking and perhaps some of the other more anti-social behaviour and the tendency to take off-footpath short-cuts etc.

A small contribution per participant to offset the damage caused is favoured by others.

And perhaps it's time for event organisers to devise events featuring a greater diversity of destinations?

“I have to agree that the charity walks do encourage a lot of people that have never walked before to do the national three peaks challenge. I am an experienced walker and would never participate in them for the reasons given by others on here. However, I would not recommend the Yorkshire three peaks to someone new to walking. I've done it twice now and navigation can be a real problem in bad weather. The first time was by choice, the second time I only did it to ensure that my sister completed it safely. As it turned out, the weather was horrendous and she didn't have a clue about navigation or the correct clothes...luckily i had lent her my spares! Had she gone off with a friend of similar experience, then it's likely that mountain rescue would have been called out.”

“It's one thing to suggest sacrificing a peak to the hordes as long as you don't end up like Mt Washington in New England where there is a railway and a road to the top. It does mean the rest of the Presidential range is fairly less populated. Please don't suggest even more people try the Yorkshire 3 peaks which are already swamped by 'organised' walks and fell races all summer. If you dislike the hordes on Scafell Pike etc do what I do and start early and you can be heading off as the tourists appear or walk in winter when they don't venture out in shorts and flip flops.”

“Whilst I agree with the previous comments, and having been asked to participate in the Three peaks will now have a think about the ramifications, no one has mentioned the fact that that there is a railway to the top of Snowdon. This last spring I watched many ill equipped people attempting to walk back down, presumably thinking that was the easy thing to do! I do like the idea in principle of issuing passes as a way of restricting numbers but it would remove the spontaneity of deciding to tackle or not depending on the weather for example, and would be incredibly expensive to police. not to mention the unsightly fences!”

“These types of walks seem to completely miss the point of hill walking;for me it's important to get as far away from people like this! You see loads of real sheep where I tend to go and very few of this human type.”

“I do wonder whether it will be possible to stop these people as the sort who drop litter etc are clearly not the most considerate or most at home with following rules. Whilst I do agree with the facts these groups are ruining the mountain paths and the integrity of slopes etc. I also, rather selfishly, think that sacrificing one hill in each mountain group to these clowns at least leaves the rest of the Lake District free for me to walk in. I've never walked Scafell Pike, mainly because every photo of the summit I've seen looks like a coach party has just turned up. I would like to walk the peak but it's quite low down my list of priorities for this reason alone. Don't tell anybody but some of the smaller, quieter and less famous peaks offer just as much enjoyment without the crowds and when completed as part of a well planned route can be even more challenging than Scafell Pike.”

“Regrettably, the huge increase in interest in walking has not been equalled by responsibility amongst walkers and ramblers. I am sure we have all encountered ill-eqipped and improperly dressed 'walkers' out on quite challeging country. TV programmes (Countryfile, Countrywise, Julie Bradbury's walks etc.) are wonderful, but one result is the spoiling and destruction of the very beauty people go to see. The most popular sites may have to be closed for periods of the year, to allow paths etc. to be rebuilt, areas replanted etc.”

“Having walked up the Llanberis route to the top of Snowdon a couple of weeks ago, I fully understand the concerns on the environment. It was like Picadilly circus at the summit! There was barely space to sit down anywhere for the quantity of people there. Many of them had travelled via the train but the path was also crowded. The last time I went there was 20 years ago and there was hardly anyone at the top then. The suggestion of limiting the amount of people entering events sounds good and charging a fee towards maintenance costs/rescue makes sense. Most importantly, people need to stay on the paths that have been made for the purpose and not walking over other areas that are ecologically sensitive and easily damaged. We have some outstanding countryside and we all have a responsibility to ensure that it still there for future generations to enjoy. We need to manage it properly now and treat it as though it is our own.”

“Why dont we copy New Zealand and USA and only allow a certain number of walkers on the routes per day by making people apply for passes.Thus limiting the number of people up the routes and less damage to the routes.”

“I have taken part and organised many events on the areas in question over the years but it was on my last one on Ben Nevis in the late 80s that I started to realise that what had been a rarity in those days was now becoming common place, especially whilst on our way down we passed another party on the way up in fancy dress,it was then I decided enough was enough and being a lifelong mountaineer and lover of the personal challenge, the solitude and peace that the mountains give if this is to continue for future generations then I think it is time to restrict this sort of activity before more damage is done.”

“Having tried this once an fallen just outside the 24h limit thanks to traffic delays, I hope no-one ever persuades me to do it again. Having done it I fully understand the objections on environmental and social grounds. The time I did it, my group came down into Wasdale in the dark and wet at 10.30 at night, passing people heading up Scafell Pike and putting themselves and others at risk. It doesn't help that many who do it are inexperienced hillwalkers. If you want a better challenge, try something that is entirely on foot: the Yorkshire Three Peaks if you are new to walking; the Welsh 3000s or even better the Lakes 3000s if you know what you're doing.”