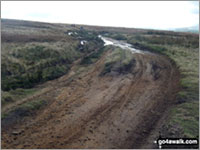 The Trail Riders' Fellowship (TRF) have successfully challenged an experimental ban on the use of 4x4s on Chapel Gate - a 3km track which runs close to Lord's Seat (Rushup Edge) an ever popular feature on Peak District walks in and around Edale.

The ban was introduced on Chapel Gate, technically a BOAT (Byway Open to All Traffic), in August 2011. It was introduced because erosion (12 metres wide at the time) on the track was causing walkers and other users to deviate onto surrounding land - land which includes a Special Area of Conservation, a Special Protection area and a Site of Special Scientific Interest.

The High Court Judge Mr Justice Ousley, who presided at the hearing, overturned the ban because the precise wording used in the reasons for the order did not reflect the nature of the experiment being undertaken. However, he did reject five other arguments made by the TRF in bringing their challenge.

The Park Authority are now analysing the evidence gathered in the 15 months during which the ban operated and are continuing to monitor the situation at Chapel Gate. Responses to this judgement will be considered at a meeting to held in January 2013.

"We are disappointed that the order has been overturned."

"But we are pleased that the judge upheld our key arguments that the experimental Traffic Regulation Order was a genuine experiment intended to assess the impact of 4x4s and trail bikes on the route at Chapel Gate."

The Trial Riders Federation has staged a number of protests in recent months about bans on the use of motorised vehicles on unsurfaced roads around the Peak District and have participated in a recent discussion on the Chapel Gate situation on a recent BBC regional news programme. In comments to the BBC, Mike Irving on behalf of the TRF said:

"There are 3,000 miles of pathway in the Peak District. We have got 2%. The others are under traffic regulation orders or are footpaths or bridleways."

"They blame us for damaging trails, but in reality they are under-repaired, damaged by water erosion, agricultural vehicles or horses."

"We know our vehicles . . . can cause a bit of damage. We've offered management solutions, but their solution is to ban us."

Obviously some skilled negotiation is now needed to resolve this situation - and others involving the different uses of historic tracks (aka green lanes) such as Chapel Gate. It's surely in no-one's interest for these to be irreparably damaged?

Also see: Off-road vehicles given the go ahead on Yorkshire.