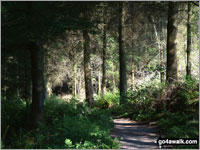 As organisations such as The Forestry Commission are increasingly challenged in dealing with new pathogens that are wreaking havoc, it seems that opportunities to enjoy walking in woodland are becoming more and more precious.

The plight of the tall and graceful Ash tree at risk from the contagious Ash Dieback disease is much in the news at the moment. However there is also a growing concern about another plant pathogen, Phytophthora austrocedrae, which is attacking Junipers in Upper Teesdale (2011) and has now been confirmed in Cumbria. Outbreaks are also being investigated in South-East England.

Previously unknown in Europe, this disease, which affects our native Juniper trees, appeared in the UK only very recently and causes tree foliage to decline and eventually die. The Phytophthora austrocedrae organism responsible for this, infects the plant through its root system. Forestry Commission scientists investigating the outbreak believe that the infection is spread via ground water, infected plant material and contaminated soil so preventing further spread is really very difficult.

A tree that is infected with the disease will have foliage that is initially a lighter colour than that of healthy trees. As the disease proceeds, the foliage withers and changes colour to become bronze and finally light brown.

"Juniper habitat is rare, and a number of people and organisations are working hard to protect and restore it. It is therefore especially disappointing to learn that this very damaging disease has affected such an important site in England."

"Potentially it could be horrendous. We don't really know to what extent this disease is going to affect Cumbria. It could be major or it could minor but there is nothing we can really do about it at the moment."

Known areas of infection in Cumbria include the Duddon Valley, Grasmere and Ullswater. Walkers are urged to keep to marked footpaths in these areas.

The Forestry Commission advises that if visiting areas of known (or suspected) areas of infection walkers should take these simple precautions:

If you think you have come across an outbreak of Phytophthora austrocedrae infection you should contact:

There is a related article on the impact on heathland of another Phytophthora pathogen.