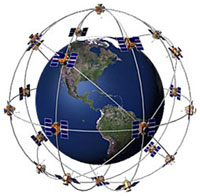 Broadband communications and Global Positioning Systems (GPS) are two technologies happily used by many walkers as navigation aids to supplement the still essential map and compass.

And - as many smartphone users will testify - these two technologies complement each other and appear to co-exist quite happily.

But this could change if a new 4G mobile broadband network is deployed as planned in the US.

LightSquared are a mobile communications company who are building a 4G wireless broadband network which is to be available around the US.

The infrastructure that LightSquared is already building to support its mobile broadband network is a hybrid based on both satellite and land-based LTE (Long Term Evolution) technology. It will include 40,000 beacons that will transmit in a part of the wireless spectrum that is very close to that which is used currently by GPS. Moreover the strength of the signals used within LightSquared's system will be much greater than the signal used by GPS.

Two US Government agencies have already found that transmissions from LightSquared's base station would interfere with (or even disable) some GPS receivers. Now the fear is that this interference will have a major impact on the operation of GPS - and all the other services that make use of location data.

Concerns about LightSquared's plans amongst GPS manufacturers and an ever larger body of users in the US is growing - prompting the creation of the Coalition to Save our GPS. Unfortunately the GPS coalition and LightSquared are in agreement neither about the cause of the clash between the two networks - nor on how the problem can be best solved.

The GPS backers say the problem is the massively greater strength of the transmissions from the LightSquared network. LightSquared, however, argue that GPS receivers have not been built with filters strong enough to 'tune out' this interference. Moreover in a June 2011 proposal LightSquared suggested that it will be technically (and commercially) possible to solve the problem with a buffer zone between the mobile broadband spectrum and the GPS spectrum. The GPS coalition were not impressed with this either and have gone on record in raising great concerns about LightSquared's overall deployment plan and their approach to dealing with the interference issue.

The outcome of this debate is important in Europe too. Disruption to the US GPS is likely to impact future use of GPS here. Plus Galileo, Europe's own GPS will use some of the same frequencies as the US GPS.

At the moment both sides are in 'discussions' with US regulators. Given the importance now of GPS for consumer, business and safety-critical services - and the potential impact of this outside of the US - expect to hear more about this soon.