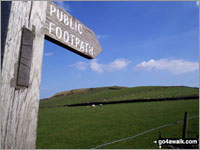 Opened in April 1951, the Peak District National Park is coming up to its 60th birthday.

Even before this, though, the Peak District was at the heart of the national debate on access rights. It was the scene of the Kinder Mass Trespass when - on 24 April 1932 - over 500 walkers converged on Kinder Scout to claim their right to walk freely over the open moors. Although five of these protesters served jail sentences, this action did pave the way for the 1949 'National Parks and Access to the Countryside Act'. This important legislation resulted in the creation of National Parks & rights-of-way and provided a framework for the protection of other areas of natural and ecological significance.

On 17 April 1951, the Peak District was the first area designated as a National Park.

Covering an area of 1,438 square metres, the Peak Disrtrict National Park is within an hour's drive for approximately 16 million people. It's not surprising, then, that over 10 million people visit it each year to enjoy the dark gritstone crags of the Dark Peak and the softer, limestone hills and woodland dales of the White Peak. Many enjoy walking - 53% do a walk of of between 2 and 10 miles* during a visit.

But it's not just about its stunning scenery. Visitors to the Peak District can also enjoy its rich cultural and industrial heritage in the shape of hill-forts, mills, lead mines, drystone walls, well dressings and more.

Perhaps surprisingly, more than 90% of the Peak District National Park is owned by private organisations -including The National Trust (12%) and several water companies (11%). The National Park Authority itself owns just under 5%.

Its success as a magnet for visitors is not without difficulties. Many experience the local economy as supporting predominantly part-time, low-paid, seasonal work; there is traffic congestion and a variety of other problems caused by either the sheer volume of visitors or the inconsiderate behaviour of a minority - including footpath erosion, damage to wild-life habitats, damage to green lanes and bridleways by off-road vehicles, moorland fires. It is hoped that many of these issues will be addressed by a more sustainable strategy for tourism developed by the Park Authority in conjunction with the tourism industry, local authorities and other agencies.

It is in the context of the overall success of the Peak District and the other National Parks since their inception 60 years ago, that concern is being expressed about the impact of the Public Bodies Bill currently under consideration by the UK parliament.

A broad range of people*** who care and enjoy the outdoors are concerned about changes to the National Park Authorities and Forestry Commission proposed in this Bill. If passed, it is claimed, the bill would permit land within National Parks to be used for other purposes so affecting access and conservation.

"We oppose those elements of the Public Bodies Bill which give government wide-ranging and unfettered powers to alter the nature and functions of bodies which hold land for the public benefit. In particular, we are concerned that the Bill allows ministers to alter the National Park Authorities and the Forestry Commission, both of which own and manage land with a wide range of public benefits and who have, as part of their statutory purposes, a commitment to contribute to the landscape and its biodiversity, and provide good-quality public access opportunities, on foot, horseback and bike.

The result could be that land which is currently enjoyed by the public is appropriated for some other purpose, or that the quality of its natural features and public access diminishes or is not secured."

So despite it's proud place in the forefront of achievements in access and conservation, the future of this iconic area is not assured. Let's make sure the Peak District National Park can continue to thrive for at least another 60 years!

There are over 3,000 kilometres of public rights-of-way in the Peak District National Park -- waiting to be walked! Here are some opportunities to get out there and enjoy some great Peak District walks.