Should farmers be paid to look after our Upland areas? 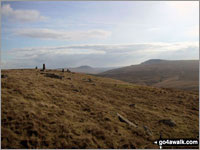 Many of the upland areas in the Lake District, Peak District, North Yorkshire and Dartmoor & Exmoor - so loved by generations of walkers - are at risk. And without a complete re-think on how they are valued and managed, many of the communities that are key in the survival of these areas will become unsustainable.

This is the major finding from a major, year-long study recently completed by the Commission for Rural Communities (CRC). The CRC is an independent body which acts as an advocate for England's rural communities and as an adviser to (and watchdog of) government.

The uplands and upland fringes cover 17% of England and around 2 million people live in these areas. They play an important part in our recreation and leisure with 40 million visiting England's upland National Parks every year.

They are also of wider importance. At least 86% of the land in England designated as 'Open Access' by CRoW and over half of England's Sites of Special Scientific Interest (SSSIs) are in the uplands. Much of our drinking water originates in upland area and decisions taken in the management of this land has a significant impact on river flows and flood risks. Natural England has previously published estimates showing that at least 200 million tonnes of Carbon is stored in upland peatland. See also Peat bogs - so much more than just a trap for unwary walkers

In this report the CRC is calling for a much more integrated approach and a move away from previously top-down, fragmented and undifferentiated policies. The new approach would see farmers and land managers rewarded for looking after these hill areas. The authors also make a number of concrete proposals (ranging from faster broadband access to cheaper housing) to ensure the survival of the communities on which the farmers depend.

Encouragingly, the report identifies real opportunities that will enable upland areas to be sustained by more than tourism or the traditional yet diminishing returns from activities such as sheep-farming.

"The natural assets provide a wealth of opportunity and potential but are strongly dependent on good stewardship and effective land management practices. We heard that hill farmers and land managers are central not only to the community but also to the provision of valuable public goods, for which they are inadequately recognised."

"The strategy should recognise that support and investment in thriving upland communities is critical to realising the full potential of these diverse areas."

The report has been welcomed by the Campaign to Protect Rural England (CPRE). Ian Woodhurst, Senior Rural Policy Officer for CPRE, says:

"We need to banish the negative mind set many people have when thinking about upland communities. They are not just disadvantaged, declining and remote. "

"This report rightly recognises the important role our uplands have in tackling future challenges whether it's providing food, water management or carbon capture."

A more guarded response has been made by the Country Land and Business Association (CLA) which represents the interests of land owners in rural England & Wales. Commenting CLA president Henry Robinson said:

" It would be preferable if the report had gone further in recognising the need to remove some of the restrictions, particularly within the planning system, that inhibit the roll-out of alternative sources of supplying energy."

It will now be interesting to see how the government prioritises this further call on its already diminished resources.

“The question must be who is the CRC independent of. Certainly not independent from the government since it is funded by them and the CRC web site is a government domain. Who are the CRC appointed by? Is it made up of landowners and farmers who are trying to protect their own interests? Sheep farming has changed the upland landscape to one denude of trees and heather is burnt to ensure game shooting is possible. What landscape do we wish to preserve and are farmers with a strong financial interest the best people to look after it? In my opinion they are not. The good news is that the government has now announced it is abolishing the CRC. So much for its independent status?!!!”