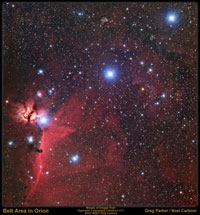 Unesco and the International Astronomical Union have joined forces in a global effort - the International Year of Astronomy 2009 to celebrate the 400th anniversary of Galileo's use of the telescope to look at the night sky. The initiative has the hugely aspirational aim of bringing "the Universe down to Earth". And there's lots of ways of getting involved in this including a number of outdoor observation aka star-counting events. Let's face it, in the current economic climate we could all do with an excuse and encouragement to take some time-out to look at the stars!

One of the key activities during 2009 is the Dark Skies Awareness project. This is concerned with the preservation of dark night skies - the loss of which poses potential problems not only for astronomical research but also for many other aspects of modern-day life including energy conservation, safety, security and our health.

The Dark Skies project is not just focussed on urban environments but also on national parks and forest parks. National Park Authorities can apply for accreditation by the International Dark-Skies Association to rank alongside sites such as the Natural Bridges National Monument in Utah, USA which in 2006 was designated as the world's first International Dark Sky Park.

A Dark Sky Park is defined as "a park or other public land possessing exceptional starry night skies and natural nocturnal habitat where light pollution is mitigated and natural darkness is valuable as an important educational, cultural, scenic, and natural resource."

The criteria applied in assessing the national park are varied covering including both the use of artificial lighting but also visual observations of the night skies leading to a rating of the light on a scale from 'pristine' to 'strongly light polluted'.

The race is now on to become the first UK (and possibly European) national park with this coveted accreditation. The Galloway Forest park in south-west Scotland together with the Exmoor and Peak District national parks in England are already starting to measure and map their dark skies using a combination of digital photography and Sky Quality meters. Having collected this data, it's hoped they can then plan their formal applications to the International Dark Skies Association for designation as a Dark Sky Park.

So - may be it's worthwhile brushing up those night-time walking skills (Navigation Skills for Walkers, Hikers and Ramblers) again.

To go walking on Exmoor see Walks on Exmoor