Hay Meadows : their role in the ecology of UK National Parks 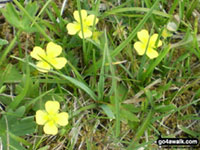 Evoking a farming system that has been disappearing, hay meadows are areas of land that have been used over many, many years to provide hay for animal feed.

During the summer months, hay meadows can become a carpet of truly beautiful wild-flowers and grasses that in turn provide a 'home' for a rich variety of insects, birds and other small animals.

The ecological diversity occurs because hay meadows are areas that are unploughed and therefore the habitats remain undisturbed.

If used for grazing, this is kept at an intensity low enough to encourage the development of diverse species of plants but high enough to prevent woodland or scrub appearing.

Wild flowers are encouraged by the use of only very low levels of fertiliser which they prefer.

Because they are usually old features, hay meadows are often surrounded by old wall boundaries, hedges or woodland which of themselves are often of interest both historically and ecologically.

The value of hay meadows is really twofold.

Firstly, when at their most glorious during the summer months, they are a riot of colour and movement as the grasses combine and move in the wind with the flowers.

Secondly, the local geology, soil and climate determines which species of flowers will thrive in any particular area and this in turn determines the nature of the rest of the ecosystem. The hay meadow then is important in maintaining the ecological identity of an area.

Researchers in the Peak District have estimated that there can be 50 plant species per square metre (for example clover, ribwort, ox-eye daisy, cowslip) providing a habitat for animals such as brown hare, insects such as yellow bumble bee and birds such as the curlew and lapwing.

The Yorkshire Dales hay meadows are to be found primarily in Swaledale and Wensleydale. Here you may be able to see plant species such as pignut, meadow buttercup or the rather splendidly named melancholy thistle.

In Northumberland, if you visit the upland hay meadows you may see species such as wood cranesbill or yellow rattle.

Until recently, intensive farming methods and other methods of producing animal feed had been leading to a decline in the number of flowers that grow in these areas.

Fortunately there is now legislation plus a variety of financial incentive schemes in place to help farmers invest in the survival of the hay meadows.

Many of the national parks are now running projects aimed at increasing awareness of hay meadows and their place in the history of the local area. In some cases the project is going as far as restoring meadows that have been lost. One of these projects in the Yorkshire Dales (The Hay Time Project) has been included in a recent edition of the BBC's Country file programme.

For more information on just one of the many flowers you can easily find on your next walk - see The Mike Knipe Column - Poking Around in the Grass.