21st Century children: are most totally disconnected from the natural word .. and does it matter? 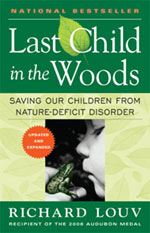 The National Trust has been making the news in recent weeks following the publication of its report, Natural Childhood.

Produced by Stephen Moss - a naturalist, author and the original producer of BBC's Springwatch - the report reviews the current literature on a condition known as 'Nature Deficit Disorder'.

'Natural Deficit Disorder' is a concept first described by Richard Louv, in 'Last Child in the Woods', his book published in 2005. In this he writes,

'Nature Deficit Disorder describes the human costs of alienation from nature, among them: diminished use of the senses, attention difficulties, and higher rates of physical and emotional illnesses.'

Whilst it may seem strange - worrying even - to be 'pathologising' this, the National Trust's report does contain data which shows contemporary childhood as one in which the ability (or even desire) to venture very far from home is severely eroded. As the author points out - if children can't even go down the street alone, what chance is there for them to explore the natural world.

In publishing the report, the National Trust are keen to stress that this is not an 'anachronistic lament on modernity' ; rather it is reporting data which shows that many children in the UK have lost contact with the natural world - and that this disconnect is having consequences for children's physical and mental health and their growing inability to assess risks to themselves and others.

Whilst making some suggestions (such as the creation of Family Nature clubs and the National Trust's own '50 things to do before you're 11 and three-quarters' campaign), the author is clear that the changes envisaged are challenging, long term and involve action by individuals, families, communities, local & national government. To move this forward, the National Trust is launching a major consultation process through which it is asking individuals and institutions to suggest ways in which we can reconnect our children with the Natural World.

For more information on The National Trust's report, Natural Childhood - and to join in with this phase of the discussion (before 25 May 2012), visit here.

Of course - a great way for children to enjoy the outdoors is on a family walk. If your children are new to walking in the countryside, initially try to select walks that you can access easily from a road, that are relatively short and that have a 'child-friendly' summit ie a top that can be explored without inducing too much parental anxiety. Games along the way such as listening to sounds (of nature not those emanating from an ipod!) or identifying wildlife, insects or flowers are also a great idea.

With older teenagers, my own experience is that whilst walking with parents may not be that appealing, participation in programmes such as the Duke of Edinburgh's Award scheme really does capture the imagination and encourages a real enthusiasm for walking and backpacking.

For more general discussion on walking with children.

For a few ideas of some smaller hills that all the family can enjoy walking up see Walk Little Hills with Big, Big views in England, Scotland and Wales.