Will our precious Rights of Way no longer be protected under law? 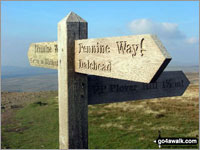 The Country Land and Business Association (CLA) - a membership organisation for landowners and rural business owners in England & Wales - is calling for a 'radical shake-up' of the access and public rights of way system.

In their latest report (February 2012), ambitiously titled 'The Right Way Forward,' the CLA propose a package of proposals which - perhaps not surprisingly - have enraged organisations such as The Ramblers and The Open Spaces Society.

The CLA proposals cover a range of topics. At the heart of them is a reduction in the protection for existing Rights-of-Way making it easier for a path to be re-routed or closed. The proposals also require a full implementation of the provision in the 2000 CROW Act which defined 2026 as the cut-off point for claiming any historic pathway not previously recorded - but the CLA are also suggesting an immediate stop to any further claims for unused or unrecorded paths. There is also a call for the greater use of the 'Permissive' status (which is a transitory arrangement) for paths rather than the more formal definition of a footpath as a legally enforceable public highway.

A further recommendation is that the onus of responsibility for an individual's safety would become that individual's who - if found not to be complying with the Countryside Code - would not be able to seek legal redress.

There have been other recent (apparently more harmonious) discussions involving the CLA and groups committed to improving access to Rights-of-Way. Some of the other parties involved in these discussions feel that this latest CLA report reneges on earlier agreements which proposed a reduction in the bureaucracy of the current RIghts-of-Way system whilst providing a more acceptable balance between and land owners and those who want to enjoy the health and cultural benefits of walking.

"The CLA reneges on an agreement it reached with other interests only two years ago. It calls for an immediate halt to claims for ancient paths, revoking the age-old rule 'Once a highway always a highway'. Yet it signed an agreement with users and local authorities [Stepping Forward] which called on government to introduce measures to simplify and speed up the process for claiming paths. Ministers are still considering these, and must implement the proposals before there can be any halt to the opportunity for the public to claim ancient routes for the map."

"We reached agreement with the CLA on many of these issues two years ago as part of a working group set up to look at the future of rights of way and we are disappointed that this report reneges on many of those jointly agreed commitments. It's a shame that the CLA have chosen to make what looks like an opportunistic bid to keep close to the government, at the expense of everyone who loves the countryside."

Whilst many of us would not object to a footpath being diverted around for example a working farmyard or an area of exceptional environment sensitivity, it's hard not to be concerned that - if implemented - these proposals would ultimately result in a great reduction in our freedom to walk and enjoy our countryside and its heritage.

The proposals in the CLA's report are particularly worrying when taken in the context of other Government initiatives such as those aimed at reducing environmental legislation, the Macdonald review of farming legislation and ongoing changes in planning regulations. And how many Local Councils in the current financial climate will be able to fund a 'Rights-of-Way' team - or find resources to engage in this debate at all.

If you have concerns about these proposals, contact your local MP, The Ramblers or the Open Spaces Society.

For more information and to read the CLA's report see:
The Right Way Forward - The CLA's common sense approach to access in the countryside.