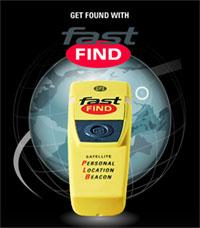 Personal Locator Beacons (PLBs) - handheld devices that use satellite technology to pinpoint the location of a user - can now be used on land in the UK. Until now, these products could be used only on ships or aircraft.

Following an announcement in December by OFCOM (who regulate the use of these types of product in the UK), the use of PLBs on land in the UK became legal from 12 January 2012.

This now opens up the use of PLBs to walkers, climbers or others who are injured in remote hill or mountain areas.

PLBs are radio beacons, (usually operating at 406 MHz) that are linked to an international satellite system for Search and Rescue (Cospas - Sarsat) . This satellite system has global coverage with a typical 'time-to-alert' of between 3 and 45 minutes.

When activated, the PLB will transmit a message which includes a code uniquely identifying the individual PLB. This code can subsequently be matched with information supplied when the the PLB was registered on purchase - name, address, next-of-kin, relevant health/medical issues. This information is held in a global database, UK data being managed by the UK Emergency Position Indicating Radio Beacon (EPIRB) Registry.

Some PLB models also transmit at 121.5 MHz providing a secondary signal that can also be picked up by over-flying aircraft and Search & Rescue homing devices. Models can also include a GPS receiver and transmit GPS data as part of the distress signal which gives a more precise initial location.

In the UK a distress signal picked up in this way will be automatically forwarded to UK Mission Control Centre at RAF Kinloss in Moray.

The team at Kinloss then establish the location and potential situation of the person in trouble (and rule out the possibility of accidental activation) before mobilising the Search and Rescue teams nearest to him/her.

To date PLBs have been available usually from suppliers of marine/electronic devices. However expect to see them now more readily available in main-stream outdoor retailers. Currently retailing at between £190 - £350, walkers who enjoy the challenge of more remote areas may consider them a very worthwhile investment.

All this begs the question as to when a PLB should be used. The official guidance is that the normal emergency response procedures (ie in the UK, dial 999 and ask for the Police) should be used first. A PLB should be activated only when there is no realistic, alternative means of rescue and the situation is serious.

The Police themselves have welcomed this development. Speaking recently on behalf of all UK police forces, DCCs Andy Cowie and Ian Shannon said:

"This legislative change will allow members of the public to use handheld PLB devices on land anywhere in the UK. When activated, they will send a distress alert message that will be picked up by satellite and relayed via the UK Mission Control Centre (UKMCC) direct to the authorities.

"The UKMCC, co-located with the Air Rescue Co-ordination Centre (ARCC), currently at RAF Kinloss, will receive, process and verify co-ordinates for activations before informing the relevant police force."

"The Police Service has been at the forefront in planning these changes and colleagues in police forces across the UK are fully aware of the changes in legislation.

"We have worked with the MoD, the Maritime and Coastguard Agency, the Department for Transport and OfCOM to get the protocols in place to deal effectively with PLB activations."