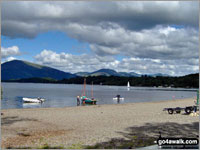 Loch Lomond from near Balmaha

Wild campers (ie those camping outside designated campsites) around Loch Lomond face fines of up to £500.

Approved in March 2011, new legislation which 'outlaws' wild camping between Dryman and Rowardennan comes into force on 1 June 2011. This section is part of the West Highland Way - popular with walkers from all over the world - and includes part of the Loch's shoreline.

The byelaws, which will apply only during the March - October period, have been put in place following a consultation exercise by the Loch Lomond & The Trossachs National Park Authority (NPA).

Action was considered necessary after many of years of 'informal' camping that in some cases was associated with anti-social behaviour such as littering, vandalism or criminal damage - this despite several campaigns promoting messages on how to camp responsibly.

Although a minority, the perpetrators of the worst excesses have continued to have a disproportionate effect on other visitors and on the overall environment. Many of the worst affected areas are close to sites of particular environmental sensitivity such as the SSSI at Sallochy Bay.

Commenting on the new arrangements, Grant Moir from the NPA said,

"Loch Lomond is a beautiful part of the National Park and one of the most famous places in Scotland to come and visit. It is important that we do everything we can to protect it whilst enhancing the visitor experience."

"We will continue to welcome day visitors into the area to enjoy the sights, such as, Ben Lomond, Conic Hill and Inchcailloch. There are also still opportunities to camp in the area at the official camp sites at Cashel and Milarrochy. There is also the new campsite at Sallochy being built by Forestry Commission Scotland for visitors to enjoy. The byelaws are giving the landscape a chance to recover and for the area to be managed for all who live or visit the area."

"Our Ranger teams will be out and about over the summer; giving advice about camping in the National Park and sharing all the things you can do and see here. They will also be out patrolling with the police to enforce the new camping byelaws as part of the Respect the Park initiative and Operation Ironworks*. Every effort is being made to make sure Loch Lomond remains a family friendly destination and we ask everyone to help protect and respect this special area."

Whilst it's regrettable that Scotland's famously liberal approach to wild camping is affected, the type of camping that has necessitated this action is surely not what was envisaged by the proponents of the Scottish Outdoor Access Code.

The legislation is to be reviewed within three years - let's hope the situation has improved by then.

*Now in its fourth year, Operation Ironworks is a cross-agency group that supplies the Loch Lomond and The Trossachs National Parks' patrols.