It's official - walking is good for your memory 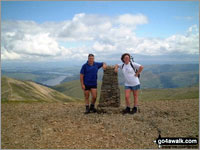 On the summit of Helvellyn
Photo: Ian McCutcheon

Researchers working at the University of Pittsburgh have studied 426 elderly individuals over 20 years to see if regular physical activity could preserve brain volume and so reduce the risk of Alzheimer's.

During the course of the study, Dr Cyrus Vance* from the Department of Radiology at the University of Pittsburgh investigated the relationship between physical activity and brain structure in two groups of adults. One of these groups was comprised of healthy adults with an average age of 78. The individuals in the second group were cognitively impaired with an average age of 81. The distance walked by each patient every week was recorded.

Brain volume - which shrinks in late adulthood leading to impaired memory and an increase in the risk of dementia - was measured for each participant using MRI scans. As well as this, each participant undertook a Mini Mental State Examination (MMSE) which is used to screen cognitive function. Walking activity was then correlated with brain volume measurements and MMSE scores.

The results were very encouraging - the researchers found that in 300 individuals walking at least 6 miles a week preserved brain volume and reduced risk of Alzheimer's by 50%. Furthermore, in people who already had the disease, the progression of cognitive decline, brain degeneration and memory loss symptoms were reduced by 50% over 10 years.

The researchers have concluded that it is really important that people with Alzheimer's and ageing - but otherwise healthy individuals - engage in physical activity such as walking on a regular basis.

By way of explanation of these results, Dr Raji says there is an important ' mind-body' connection involved in this ....physical activity improves flow of blood to the brain so brain cells have more oxygen and nutrients that help them stay healthy.

In a slightly different study** undertaken by another team also at the University of Pittsburgh, researchers studied a slightly younger (60s) group of healthy individuals. In this study the researchers were also able to show an increase in the hippocampus (the area of the brain associated with memory) and an increase in performance in memory tests associated with regular walking for just 40 minutes a day, 3 days a week.

Given the scale of the problem envisaged as our ageing population grows and therefore the number of people potentially with Alzheimer's increases - it's vital that there is a way of slowing the progression of this cruel disease. These studies appear to show that activities such as walking are a safe, effective ... and economic way of achieving this. And that has to be good news!

* From an interview with Dr Cyrus Raji from the University of Pittsburgh first broadcast on the BBC World Service on 30 November 2010. Study subsequently reported in Radiological Society of North America (2011, January 2).
** Proceedings of the National Academy of Sciences, January 31 2011