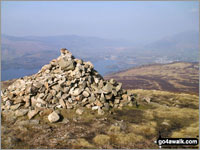 Having laboured to the top of a hill, it may be tempting to pick up a stone or a rock from around about you and add it to the summit cairn. However, this seemingly simple act of celebration may be causing serious long term damage to important historical sites.

This problem has become so acute in some of our national parks, that many of these informal cairns are being dismantled in order to save these sites of historical interest.

Robert White, senior conservation officer for the Yorkshire Dales National Park Authority, said: "There are problems at a number of historically-important sites in the national park, including Beamsley Beacon.

"During the Bronze Age, some 4,500 years ago, a large stone mound was built there, probably to mark the burial place of a local chieftain and as a boundary marker.

"Much of this cairn, now about 11 metres in diameter, still survives, but in recent years it has suffered a lot of disturbance due to people using stones from it to make modern cairns and windbreaks. Another smaller historic cairn lies further along the ridge at Old Pike and that has also lost some of its stones.

"We would urge walkers to resist the temptation to pick up stones and build cairns - wherever they are - because they can unwittingly damage ancient, historically-important sites like this stone mound."

Since 2005, the Dartmoor National Park Authority has also been involved in its own cairn restoration programme of work to fix the damage cause by the 'rearrangement' of the stones in ancient cairns to form mounds, shelters or hollows.

In 2006, the Lake District National Park Authority asked walkers not to build or add to cairns.

New cairns may be misleading particularly for walkers trying to navigate in poor conditions. And many think that they seriously detract from the natural landscape. Old cairns may be of real historical significance and hence irreplaceable.

So to paraphrase one of the longstanding mantras of the environmentally conscious walker:

“The problem, as with many things is the fact that people just don't know what damage they are doing. To the average guy they are probably entirely unaware of the ramifications of picking up a rock just to add it to the rest. Better information regarding the potential damage should be published and easily available. It goes along with the thing where people who take their tins, wrappers or other rubbish with them will maybe discard the odd apple core or banana skin thinking that it's ok, it will just rot away. They think what they are doing is ok but it actually poses a problem.”

“Most dedicated walkers already know and understand that it is absolutely wrong to add stones to cairns - I'm sure that we all recoil in horror every time someone like Julia Bradbury, the t.v. presenter doing the series of Wainwright Walks programmes, announces that is the "normal practice in these parts" to add stones to the cairns! I don't think that this kind of statement has done any Lake District route any favours at all - quite the contrary!”