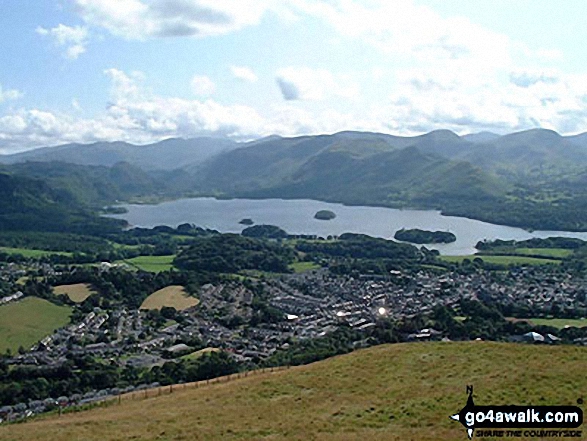 The view from the summit of Latrigg

Latrigg is on Ordnance Survey Maps: 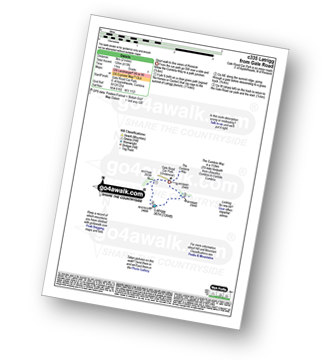 Fine views of Keswick from this little Wainwright 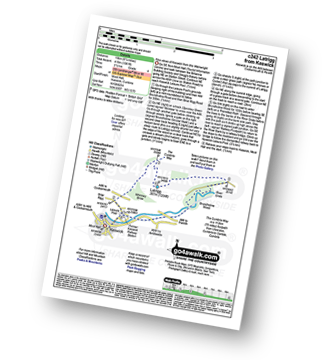 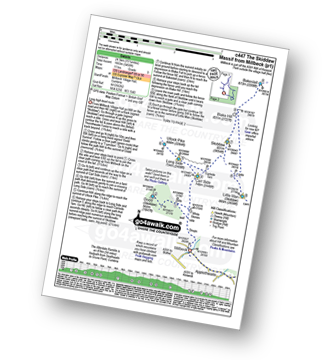 Christine Shepherd walked up on May 25th, 2008 [from/via/route] Walked from The Gale Road car park Repeated this walk on another glorious day 11.04.2021 [with] My husband Peter [weather] Sunny but very windy - It was lovely to be able to walk up this fell with my husband on our anniversary. He doesn't walk well but some kind souls have put a disabled footpath to the summit so we were able to enjoy the walk together.

Kate Peacock climbed on November 3rd, 2020 [from/via/route] Latrigg from Keswick. go4awalk C242 [with] Helen [weather] Warm for November. No rain on the ascent, rained throughout the descent. Mainly managed to stay out of the wind. - No issues. Couple of people questioning if we were doing Skiddaw. Not sure why they were worrying. Maybe because the weather was due to turn, which we were aware of a prepared for albeit our coats were in our bags as we were warm!

Clare Tait bagged on October 28th, 2020 [from/via/route] Parked at the side of the road as the parking place(under Skiddaw) was full even on such a wet day. Followed the main route up and down. Good accessible path. [with] Charlie [weather] Very changeable with heavy showers and some hail. Dodged the showers in the hour we took. Rainbows everywhere lighting up valleys and fells. - No 58 Wainwright! Had been keeping this tiddler for just such a day of unsettled weather. And, with one of us not too well with back problems this was just challenging enough to get us out. No scrambling or stiles made it the right choice for the day.

Alan Jolly walked up on July 20th, 2020 [from/via/route] From Keswick. Walk C242 [with] Michelle Jolly [weather] Overcast and drizzle. Brightened up on return

Dan Collins climbed on July 23rd, 2020 [from/via/route] From eastern side on Cumbria way, over Latrigg and down the western side though Brundelholme Forest. [with] Family [weather] Cloudy but clear at summit - Part of descent is closed. Anyone walking this should check the footpath closure whilst Bridge work is completed.

Richard Marchant climbed on July 7th, 2019 [from/via/route] Straight up from Keswick to watch my son run in the Skiddaw Fell Race [with] Thomas Marchant my son. [weather] Clear blue skies, no wind very hot. - First time for Thomas to run the full Skiddaw Fell Race up and down 960m 9.6 miles an awesome effort and a 13th position overall.

Geoffrey Robertshaw bagged on June 15th, 2019 [from/via/route] Up from Roshwaite [with] Wife [weather] Great - Great Views at the top

Joe Mccusker scaled on September 21st, 2018 [from/via/route] keswick [with] Paula, Alfie (dog) and Lily (dog) ... her first Wainwright. [weather] Sunny, ate wedding cake on the summit from our wedding on the 7th August 2018 - Very enjoyable walk, again not too taxing. Would recommend this walk for those who don't want anything too strenuous.

Chris Booth walked up on September 24th, 2018 [from/via/route] keswick - C242 Latrigg from Keswick [with] Sue and the dogs Dora and Lucy [weather] Dry and cloudy - Good pint of OP and goulash at Dog and Gun

Richard Wilkinson conquered on April 8th, 2017 [from/via/route] Roadside parking at Briar Rigg - route followed the Cumbria Way, before turning off to the summit; continued towards Brundholme, before returning along a short stretch of road and heading into Brundholme Wood. [weather] Hazy sunny day - Great views across Keswick and Derwent Water to Cat Bells - Lambs out in the fields down to Brundholme.

Anthony Scott walked up on March 10th, 2017 [from/via/route] Station Road, Keswick [with] me [weather] Grey cloud, some drizzle, mild - Nice easy route. Only 90 minutes up and down.

Craig Steeland summited on October 18th, 2016 [from/via/route] Brantholm [with] on my own [weather] cold, grey, windy and light rain

Mark Davidson scaled on June 10th, 2002 [with] Theresa [weather] Bit rainy and cloudy but still got a fantastic view across Derwent Water to the Newland Fells

Christine Knowles summited on May 26th, 2012 [from/via/route] From Scales Farm via Blencathra [with] Graham [weather] Hot, but windy - Top closed off for hang gliders, but no gliding presumably because too windy!

Mark Luckett walked up on May 9th, 2015 [from/via/route] From the Centre of Keswick [with] Susan Luckett & Hessy [weather] Bit overcast but warm - Fantastic walk up to Latrigg and the views over Keswick and Derwent Water were fantastic. this was the last day of our 3 day trip and unfortunately it was the last Wainwright for our faithful pooch as she died a few months later. Fond memories.

Jon Mapp climbed on August 21st, 2015 [from/via/route] C242 from Keswick County Hotel [with] Suzzanné [weather] Started fine - but drizzle by the time we got to the top - limited views because of the cloud. Cleared later - We originally missed the path to the disused railway line - although we kept on the path by the Greta and finally came upon the railway path - which led us right back to the hotel :-)

Stephen Reader scaled on May 17th, 2015 [from/via/route] From the east via the Railway walk [with] Bev & Afia [weather] Dry but windy and cold

Nicholas Harrison walked up during October, 2000 [with] B&S

Nick Dobson bagged on July 29th, 2013 [from/via/route] car park [with] Margaret, Kate & Ralph [weather] cloudy/misty - completed this prior to Skiddaw via Jenkins hill, however this was Kate's 1st mountain and after having lunch in the clouds after passing the little man, we returned back. Dress sense was perhaps more suited to a more tropical climate.

Scott Clarke walked up on August 11th, 2014 [from/via/route] Straight up the hill from Keswick [with] Brady Bunch [weather] Chilly and windy, but clear

Dave Eyes hiked on May 17th, 2014 [from/via/route] From Keswick up towards Skiddaw but turning back around the back of Latrigg. Down the other side and back along disused railway line to Keswick [with] Christine Eyes, Kath and Kevin [weather] Sunny but windy on top - fabulous views, gliders being launched from top, wave from gyrocopter on way back. beer at twa dogs inn.

David Noble summited on April 15th, 2014 [from/via/route] Straight up from Gale Raod [with] Jack [weather] Sunny - Jogged back down

Raymond Barnett conquered on April 4th, 2014 [with] own [weather] mist

Tim Buckley walked up on October 28th, 2009 [from/via/route] From our cabin just north of Keswick, we joined the Cumbria Way, through woodland and up to the top, returned walking along the river Greta crossing an old railway bridge and back to Keswick. [with] Lynne, Esther, Naomi and Amy. [weather] Dry overcaste and windy. - Views across Derwent Water to Cat Bells.

Stephen Rodger bagged on August 8th, 2013 [from/via/route] Keswick [with] Sarah [weather] Warm and humid, some white cloud. blue skies - Nice views from top, with the imposing Skiddaw as a backdrop ! Hope to do this in the future.

Kevin Parnham conquered on December 31st, 2012 [from/via/route] From Keswick town centre via Spooney Green Lane [with] Jo Tasker [weather] Less windy than the previous day but still cold a very breezy on the summit. - Walked from Keswick town centre without stopping,reached summit in 50 minutes.Cam back down through the trees on the Keswick side of the hill.

Charlie Housley hiked on September 2nd, 2009 [from/via/route] Skiddaw tourist path car park. [with] Solo`d after the descent from Skiddaw. [weather] Abysmal. Low cloud and heavy rain. - After the ascent and descent of Skiddaw and surrounding tops, Jo had injured her lower back and so she waited in the car whilst I made a quick dash up to the top of this lowly fell.

More Photographs & Pictures of views from, on or of Latrigg 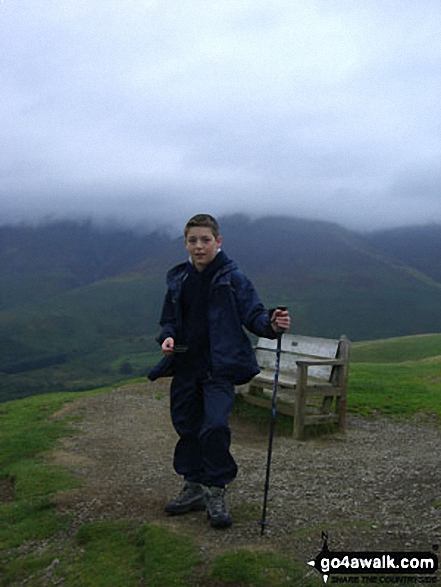 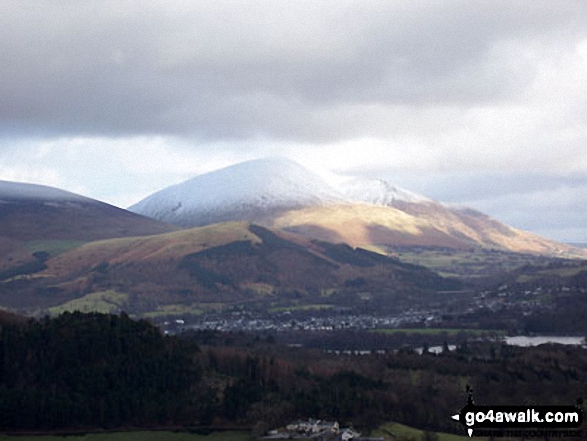 Swinside, Keswick, Latrigg and Blencathra (or Saddleback) from Rowling End 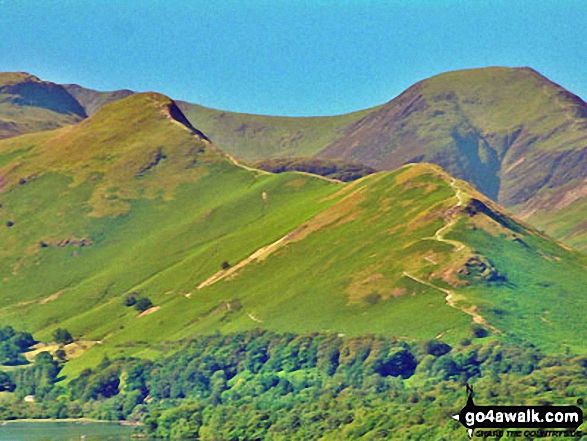 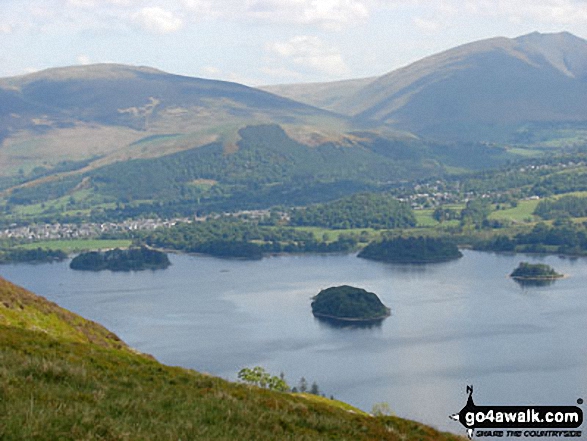 Send us your photographs and pictures on, of, or from Latrigg

If you would like to add your walk photographs and pictures featuring views from, on or of Latrigg to this page, please send them as email attachments (configured for any computer) along with your name to: