Other Peaks, Tops and Hills in England, Scotland & Wales: Bridgets 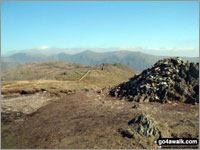 Despite the best efforts of various UK Mountain Classification Systems some worthy and quite well known Peaks, Tops and Hills just don't qualify for inclusion.

For example, every year thousands of people climb to the top of Wansfell Pike in the Lake District enjoy the splendid view and descend again satisfied they have 'bagged' one of The Lake District's most famous hills.

So because hills like Wansfell Pike are worthwhile places to walk to that you might otherwise miss - we have decided to give these places a classification all of their own - Bridgets.

To qualify as a Bridget the hill/mountain must:

Walking your way through a list of hills can bring added purpose and inspiration to your walking.

In any event if it gets you out from in front of this computer screen and into the UK Hills and Mountains - then that is reason enough.

The Bridgets we have identified so far are included on each available Peak Bagging Map/Tick List.

If you feel we have omitted a hill or top that deserves to be included as a Bridget - then Let us know an we will add it to our database.