The summit of Bera Bach is marked by a rocky outcrop.

Bera Bach is classified as: 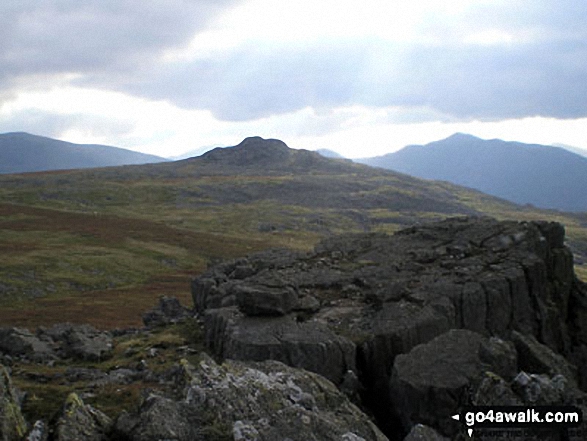 You can find Bera Bach & all the walks that climb it on these unique free-to-access Interactive Walk Planning Maps: (click/TAP to select)

Melfyn Parry walked up Bera Bach on May 15th, 2022 [from/via/route] Start point is car park in Bethesda, route taken involved walking around Moelwyn Faban, then up LLefn. Walked on path around Y Gyrn & followed this across to Drosgl. Took path around Drosgl up towards Bera Bach & ascended summit from South side. Retraced steps & then walked across heathland to ascend summit of Bera Mawr. This was a good short scramble & the two monoliths do resemble Adam & Eve on Tryfan. Too windy to try anything heroic so retraced steps to base & then followed path around base of Bera Bach to follow path down over Gyrn Wigau before returning to carpark via Gerlan. [with] On my own [weather] Great initially, very warm. Wind picked up about 11am so added a layer. Spots of rain towards the end but a great day out. - Could have added peaks of Y Gyrn & Drosgl but have done these before so saved my energy for the Bera's. 15km walk today.

Mark Davidson summited Bera Bach on August 6th, 2002 [with] Alone [weather] Warm with high cloud but a bit hazy - Route directions for this walk are excellent

Gerald Murphy scaled Bera Bach on July 24th, 2014 [from/via/route] Bethesda riverside car park, Gerlan, Gernwydd into Cwm Llafar but fording the Afon Llafar near the former dam. Then crossed soft ground (probably dangerous after wet weather) to Foel Fechan, up to Foel Ganol & Yr Elen before crossing the nice ridge to Carnedd Llywelyn. From there down & up to Foel Grach (including a quick peak in the Refuge Hut. On from there to Carnedd Gwenllian (formerly Carnedd Uchaf) & then finishing the outward leg at Foel Fras. i then doubled back towards Carnedd Gwennllian but before reaching the Cairn, took the path down to Yr Aryg, onto Bera Bach, Drosgl & lastly Grn Wigau before dropping down to Bethesda. [with] alone [weather] Lovely sunny day but see further details on my logs of the walks of the other peaks mentioned above. - 1. I can't really understand why Bera Bach is the "small" Bera when "big" Bera Mawr has a lower elevation & the relative heights of the two above the ridge seem so similar. 2. Descending from Grn Wigau was confusing. the path, which had been clear, suddenly seems to go off to the right - ie away from Bethesda & heading for different farms. Following my elevated clear sight of Bethesda & my start point, I eventually reached a wall headed down to Bethesda. On either side were gates & stiles. I made the mistake of choosing the one on he right - it took me to what seemed to be a dead end from which, by now quite tired, I had to climb back to the two gates. I now chose the stile on the left, fingers crossed that this would be a workable route back. It was correct & took me all the way back to Gernwydd & the road back to the car park.

More Photographs & Pictures of views from, on or of Bera Bach 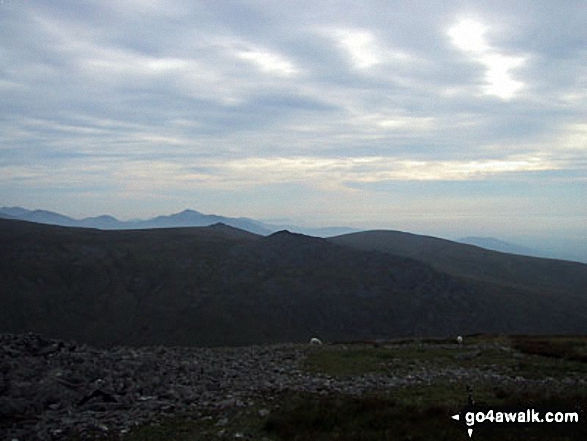 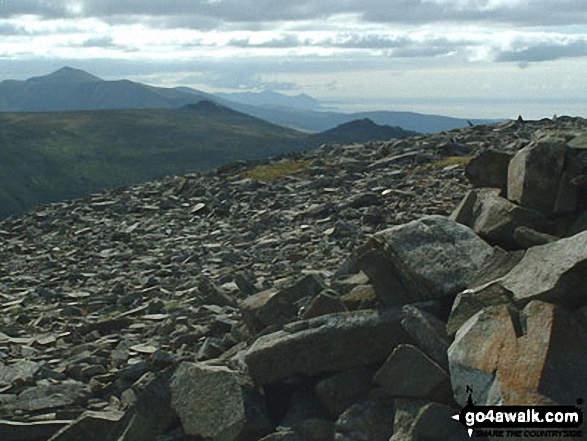 Elidir Fawr, Bera Bach and Bera Mawr, with Yr Eifl in the distance from Llwytmor

Send us your photographs and pictures on, of, or from Bera Bach

If you would like to add your walk photographs and pictures featuring views from, on or of Bera Bach to this page, please send them as email attachments (configured for any computer) along with your name to: