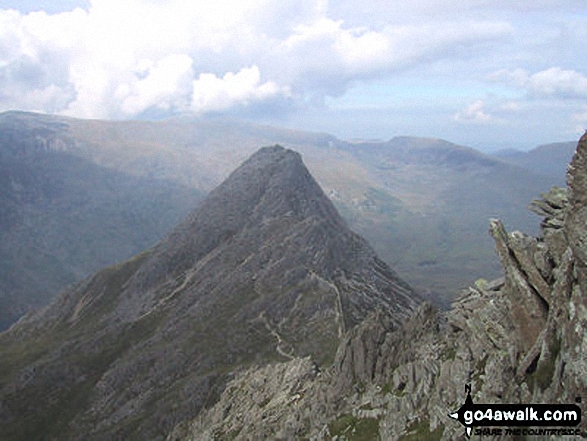 Tryfan is on Ordnance Survey Maps: 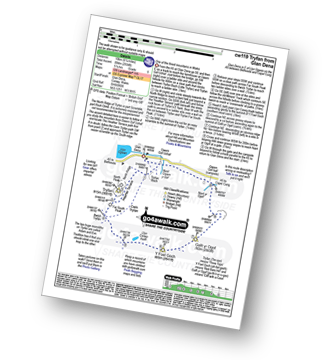 David Wand scaled on June 1st, 1992 [weather] Sunny - Did as part of training for SF

Mark Davidson climbed on May 27th, 2004 [with] Alone [weather] Bright, sunny and warm - I think the north ridge of Tryfan was the scariest walk I have ever done - and I thought Crib Goch, Sharp Edge and Striding Edge were fun!

Richard Gunner summited on September 13th, 2015 [from/via/route] Owen Cottage,via the south ridge [with] John Willmott [weather] Cloudy but fine - Our first scramble,so it was quite challenging.

Paul Redman conquered on July 6th, 2014 [from/via/route] Cwm [with] Solo [weather] fair - great scrambles to be had , plan on many revisits

Kenneth Hope-thompson walked up on July 5th, 2011 [with] Conwy Walking Week [weather] Cloudy, poor views. - Too much of a scramble.

Rachael Tyler climbed on June 27th, 2015 [from/via/route] North Ridge [with] Ashley Tyler [weather] Fine. Mostly sunny. Blustery near the summit. - Scrambled all the way up. Way out of my comfort zone but did it all the same!

Marilyn Wadkin conquered on May 12th, 2013 [from/via/route] Up the North ridge and down past Llyn Bochlwyn [with] Rob [weather] Rained all day, windy and cold.

Leon Harvey scaled on August 24th, 2014 [from/via/route] Y Gribin and Glyder Fawr/Fach [with] Solo (although the top was busy) [weather] Cool going up Wet coming down - Jumped from Adam to Eve :)

Simon Neilson-clark walked up on June 14th, 2014 [from/via/route] Car park at the foot in a circlur walk on to Foel goch [with] Mrs H [weather] Low cloud with occasioanl sunshine later - This is very hard scambling More arms than legs

Stephen Lewis scaled on August 31st, 2013 [from/via/route] cw119, parked on A5 shoulder near Gwern Gof Uchaf campsite [with] Alone [weather] Sun, cloud and wind - Climbed on Adam, but too windy to jump to Eve

Pamela Seniore walked up on October 26th, 2013 [from/via/route] Via the north ridge. [with] With MB & Rupert. [weather] Dry but cold, very windy & cloudy at times. - Good climbing weather, took advise from Mr Merrick on the route, it was my hardest climb to date but really enjoyed it. Won't take the dog next time. Made the most of a photo opportunity on the cannon & at Adam & Eve. MB to bag with Tom at a later date. Took 5+ hours & we lost the path on the way down but got a good view of The Glyders (next on the list).

Samantha Kimber climbed during October, 1993 [from/via/route] Can't remember! [with] The rest of the 1994 Powys Schools and Youth Exploration gang [weather] Atrocious! Snow, hail and strong winds! Visibility was very poor indeed. - Ropes were required for scrambling to the summit, mainly due to the strong winds. No view was seen!

John Drysdale bagged on August 21st, 2006 [from/via/route] Up the ridge [with] Tim Good [weather] Very wet, poor visibility - Tim did the jump on the summit, I declined.

Ray O'Hara conquered on October 11th, 2012 [from/via/route] CW119 [with] Doug Downie [weather] Low cloud & rain - Twisted my left ankle on the scramble back down from the summit and ended up hobbling back down the Heather Terrace route. 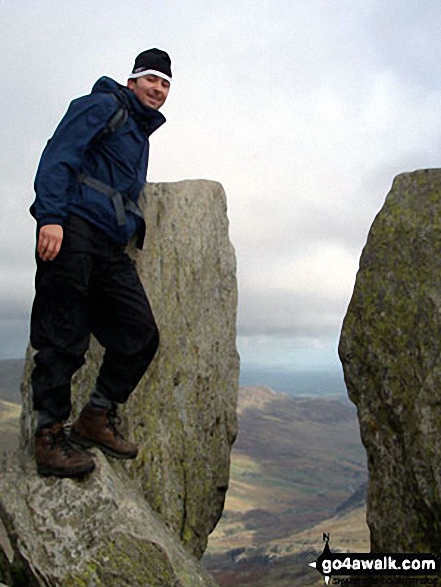 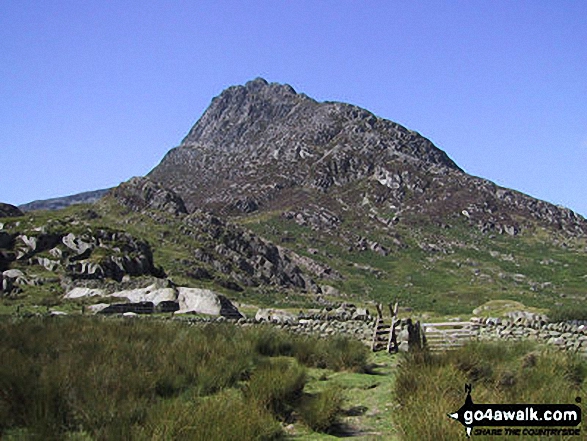 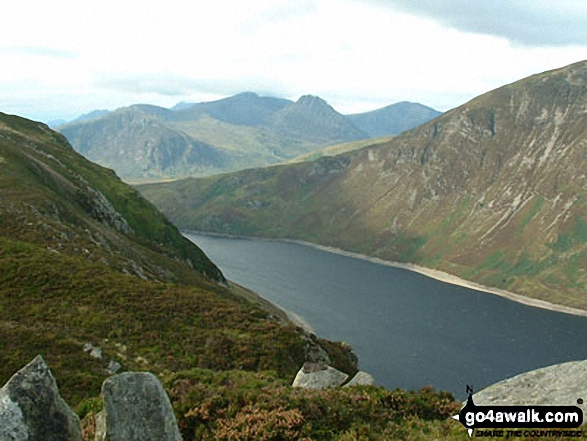 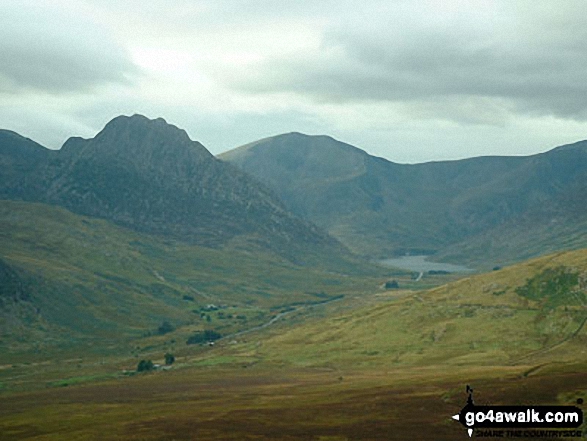 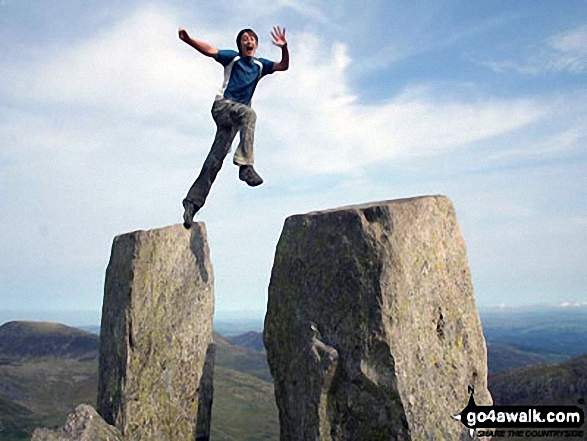 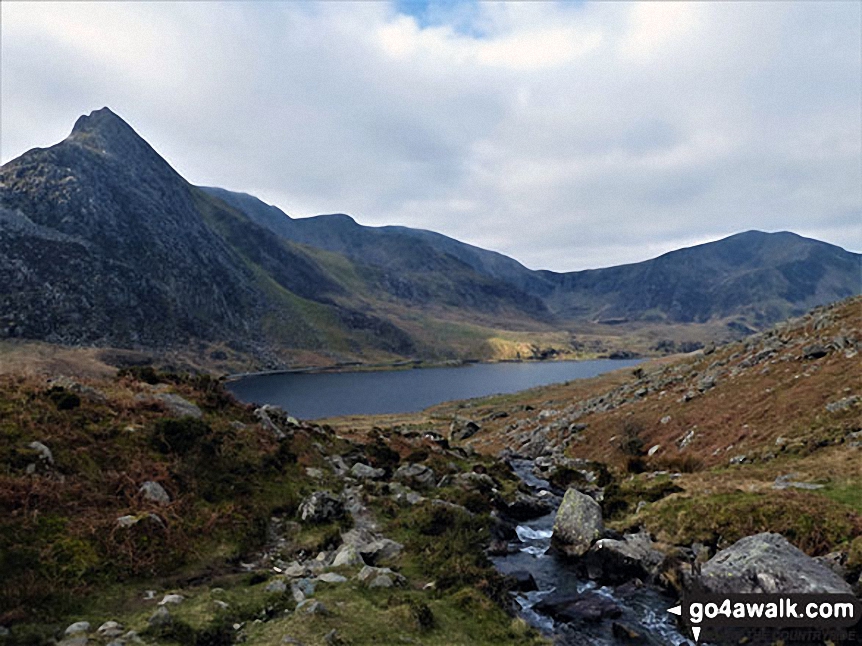 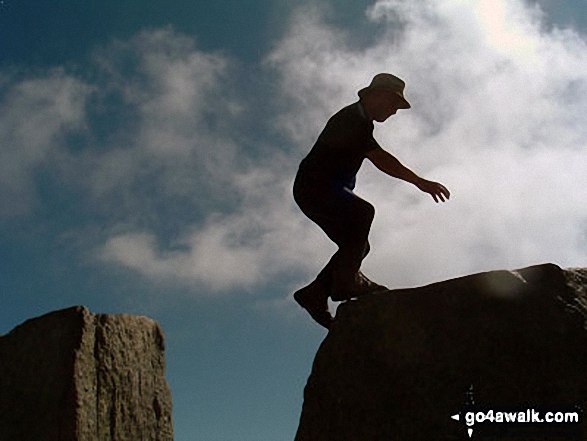 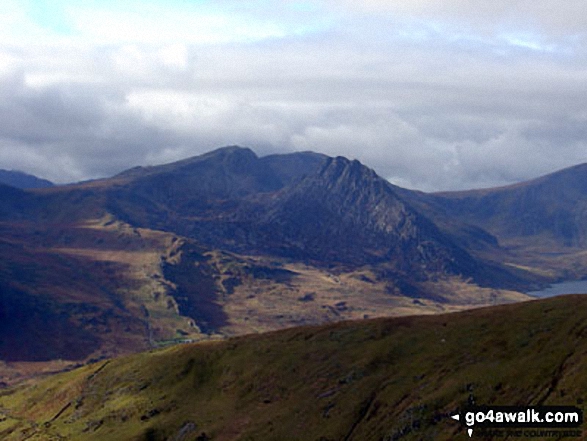 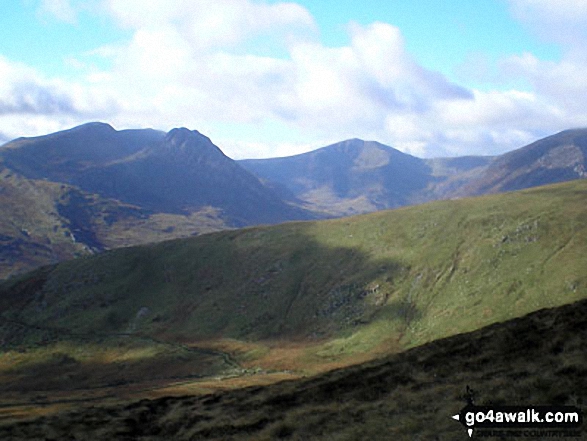 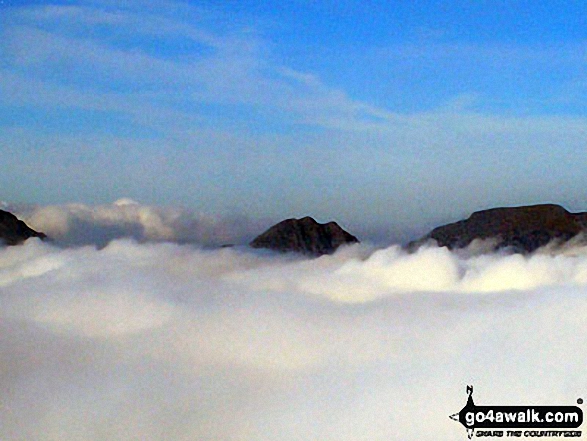 The Glyderau (Glyders) (left), Tryfan and Carrnedd Dafydd (The Carneddau) poking through low cloud from the summit of Carnedd Moel Siabod