Sail (Derwent Fells) is classified as: 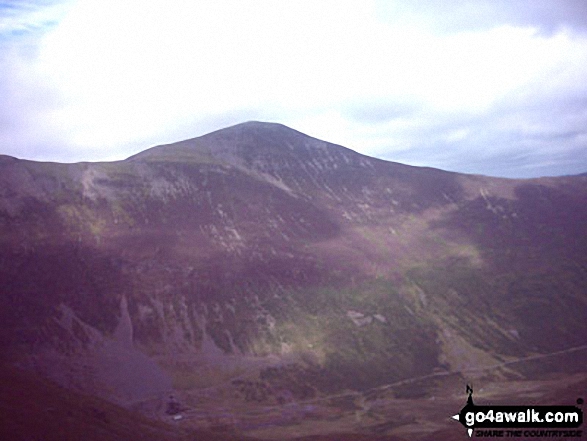 The view from the summit of Sail (Derwent Fells)

You can find Sail (Derwent Fells) & all the walks that climb it on these unique free-to-access Interactive Walk Planning Maps: (click/TAP to select) Chris Sheard bagged on May 18th, 2022 [from/via/route] Along from Scar Craggs along ridge [with] George [weather] Pleasant at ground level, no rain brightened later later with sunshine as we completed the round - Made this ascent as part of a nice circular coming down the other side of a horse shoe

Richard Beardsley hiked on July 14th, 2021 [from/via/route] Dropped off & started route at 0800 hrs from Braithwaite. Route C299. (Barrow, Stile End, Outerside, Sail, Scar Crags & Causey Pike). [with] Myself. [weather] Warm & sunny day. A short spell of low cloud around Sail. - A shorter Coledale Round starting at Braithwaite. An accurate route description which was followed. The only deviation was to include Sail on the easy to follow zig - zag path from the col between Sail & Scar Crags. The steep descent from Causey Pike was interesting so easy does it is the best way. Time took 5 & 1/2 hrs.

Claire Murray walked up on April 4th, 2021 [from/via/route] Coledale Horseshoe. Grisedale Pike, Hopegill Head, Crag Hill, Sail & Outerside [with] Vitor [weather] Awful! Started off sunny & hot but was 40mph winds at the top & complete cloud. Very windy & cold, much nicer at lower heights - Hard going to start with but a lovely easy to follow track. Would be much nicer on a day with better weather

Kevin Foster summited on March 4th, 2020 [from/via/route] Crag Hill. [with] Henry. [weather] Cloudy with light snow showers. - The crux/highlight of today's walk was the ridge linking Crag Hill with Sail. The last deposits of winter snow making the easy ridge scramble that much more fun with steep drops on either side & great views in every direction.

Christine Shepherd scaled on September 22nd, 2007 [from/via/route] I climbed Sail using walk c137 The Coldale Round from Braithwaite [with] On my own [weather] Clear & sunny - I climbed this peak again on 2.6.10 on a beautiful but sad day in the Lake District. Climbed this for a third time as part of the 10 in 10 challenge on 22.6.2019

Richard Marchant climbed on October 3rd, 1993 [from/via/route] We parked at the car park just before the visitors centre up in Whinlatter Pass. The walk was basically Coledale Round starting with a walk through the Hospital Plantation on to the ridge of Sleet How & the ascent of Grisedale Pike then on to Hopegill Head-Sand Hill down to Coledale Hause followed then by the ascent of Crag Hill (Eel Crag) to Sail & then descended to Outerside missing out on Causey Pike due to Marlene shattered as it had been a long day for her, so then to Stile End & down into Braithwaite & back up the road to the car. That trek up the road seem to go on for ever & was a bad move. [with] Marlene & Alan Harker [weather] A fine day with no wind & wall to wall sunshine - Carried out the Coledale Round with Marlene & Alan Harker & the memorable thing we still laugh about today was the the pubs didn't open all day then & when we got into Braithwaite everything was closed & Marlene was so looking forward to a half of Shandy.

Craig Steeland hiked on June 9th, 2017 [from/via/route] From Crummock Water over the tops to Braithwaite taking in six Wainwrights [with] Sue [weather] Partly cloudy & quite cool with moderate winds - Took the bus from Braithwaite to Keswick & then another bus to Crummock Water. The second bus cost £7.70 per person one way!

Jon Mapp conquered on June 20th, 2015 [from/via/route] c408 [with] Suzzanné, Caroline and Robin [weather] Was initially low cloud & drizzle but started to clear - Walking down from Crag Hill this looks like a massive climb but is quite easy

Elaine Evans scaled on May 21st, 2015 [from/via/route] From Braithwaite to Sail then on to Crag Hill (Eel Crag) & back to Braithwaite via old mine track. [with] Sue [weather] Dry & cloudy with a cold wind. - Good views of Grisedale Pike & Causey Pike plus others

Dave Eyes summited on August 7th, 2014 [from/via/route] From Braithwaite, up Barrow, on to Outersides, up to the saddle & up the Sail zig zags, then up to Eel Crag, then round to Wandope. Returning via Eel Crag & Sail - then up to Scar Crags , along the ridge to Causey pike & then down & round to Braithwaite [with] Christine Eyes [weather] perfect

Lee Senior walked up on April 5th, 2014 [from/via/route] As part of COledale Round [with] Andy [weather] rain & low cloud with mist

Tim Buckley conquered on August 17th, 2011 [from/via/route] From Eal Crag en-route to Scar Crags. Coledale Round. [with] Solo walk. [weather] Hot & sunny. - Fix the Fells have built a zig zag raised path up the fell, from the top looks like the Inka trail, Macu Picu was not at the other end just Scar Crags.

Kevin Parnham bagged on June 8th, 2013 [from/via/route] From Craghill [with] Jo and Charlotte [weather] warm & sunny - Very small cairn in the middle of a bog

Dale Verrall walked up on March 13th, 2013 [from/via/route] Braithwaithe - C408 [with] Amber [weather] Blue sky but snow on top & on the north face for the climb down

Charlie Housley scaled on July 5th, 2012 [from/via/route] As part of an extended Coledale Round which included Grisedale Pike, Hopegill Head, Whitesdie, Wandope, Whiteless Pike, Eel Crag (Crag Hill), Grasmoor & Scar Crags. [with] Solo. [weather] A proper mixture today. Started out with the sun glaringly hot & no cloud, then later, lots of dark clouds & the threat of thunder & lightning. One thing that was constant was the humidity; which was a cracking 90% apparently.

More Photographs & Pictures of views from, on or of Sail (Derwent Fells) Send us your photographs and pictures on, of, or from Sail (Derwent Fells)

If you would like to add your walk photographs and pictures featuring views from, on or of Sail (Derwent Fells) to this page, please send them as email attachments (configured for any computer) along with your name to: