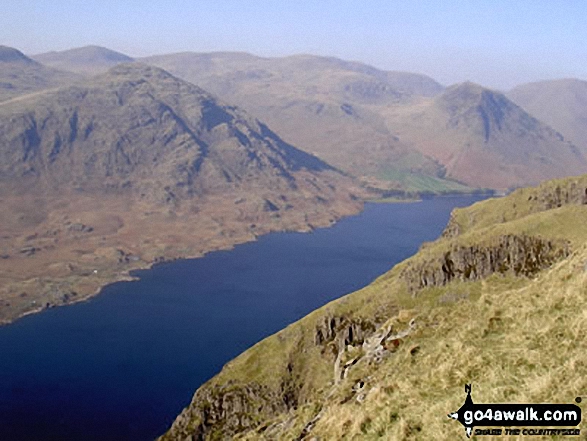 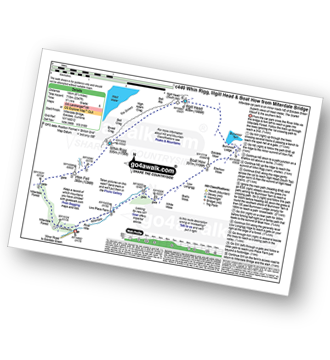 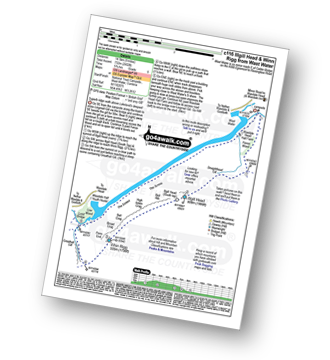 John Fenwick walked up on October 4th, 2020 [from/via/route] Walked from Wasdale head carpark. [with] Romany [weather] Sunny with some clouds and not too windy - Followed Walk c116 to Whin Rig but after talking to a couple of walkers decided not to follow the walk back along the bank of Wast Water due to being too rocky. Instead we continued on strait to Miterdale forest then droped left to return past Burnmoor Tarn.

Richard Beardsley climbed on September 20th, 2019 [from/via/route] Used part of Route C116 On summiting Illgill Head and Whin Rigg we retraced back to the start point. [with] Gillian. [weather] Lovely sunny day. - Parked at Campsite, (£7 all day), and commenced walk at 0945hrs. Ideal weather conditions attracting lots of walkers for Scafell Pike. Arrived back at 1415hrs after our walk along the ridge above Wast Water. Thoroughly enjoyable day.

Jamie Bryan bagged on August 13th, 2019 [from/via/route] c116 [weather] Sunny and clear. Can see all the way to the coast and Sellafield

Elaine Evans summited on May 17th, 2019 [from/via/route] From car park beside Forest Bridge at Nether Wasdale up to Whin Rigg then continued to Illgill Head before retracing our steps to Whin Rigg. Descended on a clear path which tracked diagonally across the fell to join main path through farm and back to car. [with] Sue [weather] Glorious day - sunshine, light breeze. - Amazing views - able to see some tops still to do. Future walks planned.

Chris Sheard scaled on April 9th, 2018 [from/via/route] Up from Strands Inn through steep gill to ridge passing through to Ill gill. fabulous day [with] George [weather] Started and finished with broken cloud and sun - Very steep up and nice circuit

Craig Steeland climbed on August 30th, 2017 [from/via/route] From car park near Santon Bridge below Irton Pike [with] Sue [weather] Partly cloudy and cool with light winds - Muddy and heavy going underfoot. Not a walk that will be repeated. Took and out and back route rather than walking along the road or along Wasdale Screes.

Richard Fulcher summited on May 2nd, 2017 [from/via/route] Wasdale Head [with] Jen [weather] Sunny, clear blue sky, windy - The path up from Wasdale Head was well marked & firm under foot. The tops were very pleasant but the walk down Greathall Gill was tricky and it wasn't easy to find the path near the bottom. However, by far the worst part of the walk (sometimes dangerous) was along the shore of the lake with many scree slopes to navigate across - loose boulders and rocks. We were late back after 10.5 hours.

John Tippins scaled on February 14th, 2017 [from/via/route] Scaly Moss [weather] Bright, beautiful, sunny day but with very strong winds gusting at 50mph. Made ascents difficult. - Didn't fancy the return walk along the screes, as suggested on this website. I don't like walking on screes and especially so close to the deepest lake in Cumbria - too eerie. Met a guy on the ridge who confirmed my view. "It's horrible, absolutely horrible", he said. Returned via the ridge. And the wind was still really fierce - kept well away from the edge.

Mark Davidson walked up on April 16th, 2009 [with] Mike [weather] Good - nice and sunny - Had been up both Whin Rigg and Illgill Head before but the main purpose of the walk was to bag Boat How.

Clive Ward climbed on July 23rd, 2016 [from/via/route] Porterthwaite. Irton Fell, Whin Rigg, Illgill Head then back via Burnmoor Tarn [with] Solo [weather] Fair, some sun. Tops clear - good views down to Wastewater - 3 days after Alexandra arrived. I drove back to lodge from Manchester on 22nd

Charlie Housley hiked on June 2nd, 2016 [from/via/route] Parked up at the car park at the base of Iron Pike and followed the good path along Irton Fell. [with] Solo. [weather] Glorious. Not a cloud in the sky.

Christine Knowles bagged on May 11th, 2015 [from/via/route] from Wasdale Head Inn via Ilgill Head [with] Graham [weather] Windy and cloud right down so no views at all, mostly.

Kevin Parnham hiked on August 6th, 2014 [from/via/route] Illgill Head and back via Wastwater Screes [with] Jo and Charlotte [weather] Generally ok but cloudy on the summit - great views over wastwater

Doug Martin hiked on July 10th, 2013 [from/via/route] Wasdale Head - Illgill Head - Whin Rigg - Greathall Gill - lakeside return - Boulder field [with] Solo [weather] Cloudy and overcast but very humid 24 degrees - sweated buckets. - With high temperatures the cloud was most welcome. Followed Wainwrights crag path once on ridge - views are stunning albeit the cloud reduced visibility towards other peaks. Brightened up considerably later in day by which time I was working my way through the boulder field and screes. Well worth the effort but would not rush to do again - lakeside return that is.

Bill Rowlands walked up on September 29th, 2012 [from/via/route] Miterdale Forest and Irton Fell, on the way to Illgill Head [with] Jake - the chocolate labrador [weather] Cloudy and very windy

Christine Shepherd climbed on August 18th, 2009 [from/via/route] Walked from Wasdale Head using walk c116 [with] On my own [weather] Rainy and misty 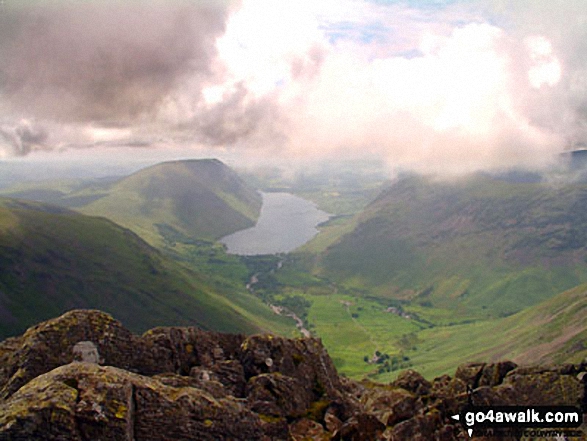 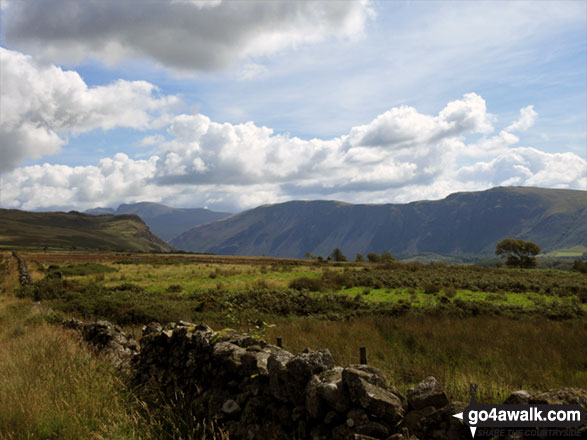 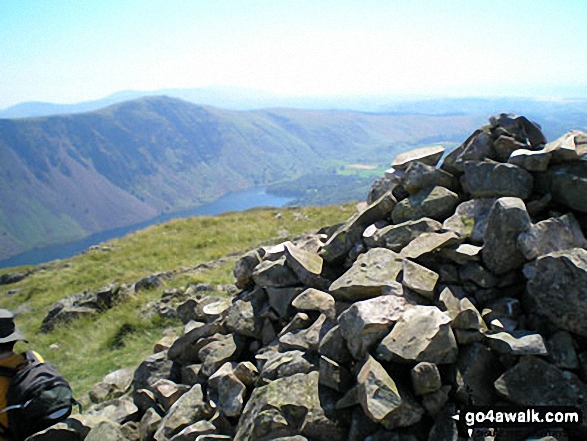 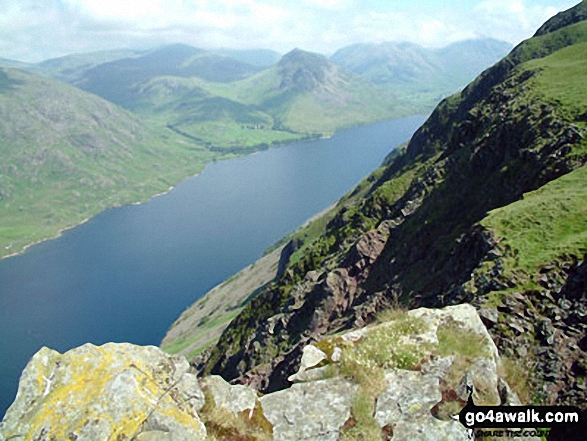 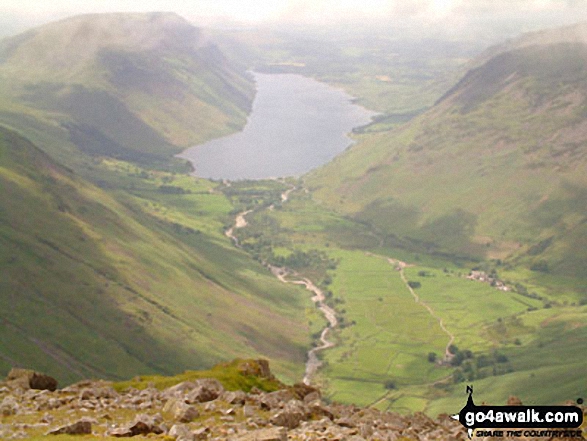 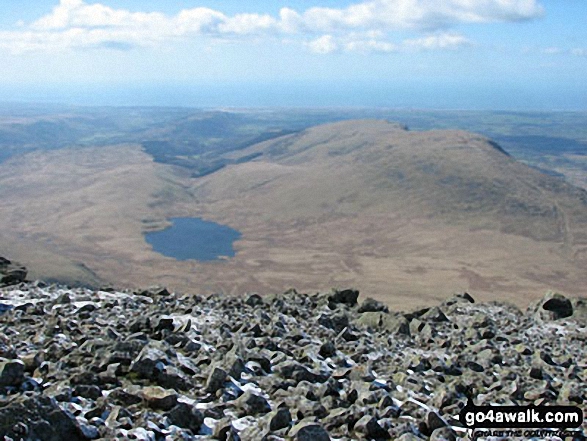 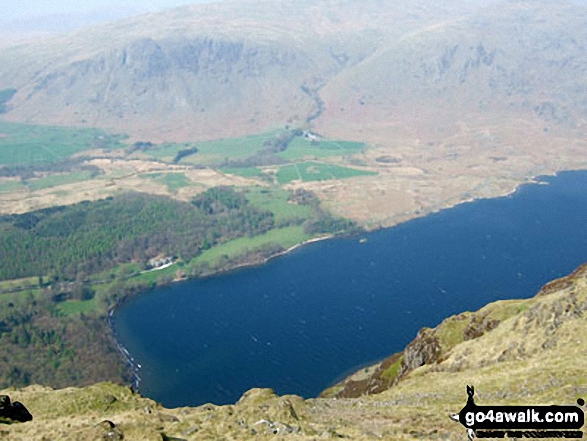