Rossett Pike is classified as: 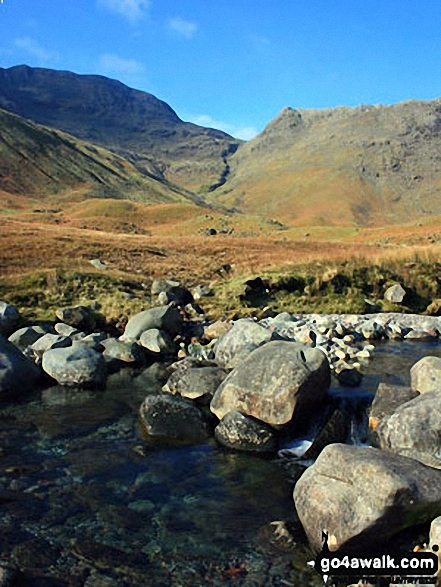 Superb views up the Langdale Valley 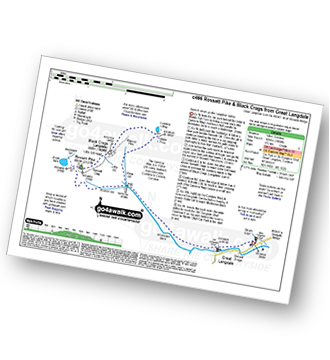 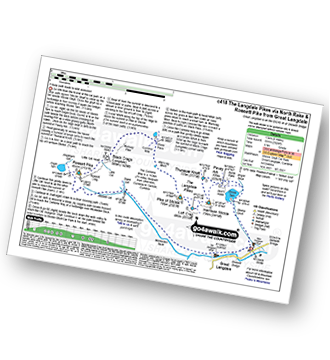 Kevin Foster climbed on July 2nd, 2021 [from/via/route] The Old Dungeon Ghyll National Trust car park. [with] By myself. [weather] Some clouds. - The paved path to the head of Rossett Gill goes up & down a bit & passes Angle Tarn. I would have stayed for a break here but the wind had picked up & it had clouded over so I decided to press on. The ascent of Rossett Pike from the top of the rise to the head of Rossett Gill is quite easy ( a five minute walk). Descending back into Langdale via the packhorse path has improved due to large sections being paved but it is still long & my knees were glad to reach the valley floor. A classic walk!

John Bryers conquered on August 13th, 2020 [from/via/route] Walked up Oxendale through the farm. Continued WSW beside the wall & then bear SW (left) at a fork on a level path to reach the footbridge over Oxendale Beck. Cross the bridge & bear SW up a clear path that eventually bears S beside Browney Gill to reach a junction of paths on the col. Turning left up to peak of Pike O' Blisco. Returning to col & up to Great Crag, skirting around on right to Crinkle Crag (South top) & along ridge to Crinkle Crags (North Top). Continued along ridge along the crinkle crags 4 & 5 & up to top of Bow Fell. continued along ridge dropping down to Ore Gap & continued up to top of Esk Pike. Continued down to Esk Hause & up Allen Crags. Turning left down to Angle Tarn & up to top of Rossett Pike, returning down Rosset Ghyll (With a detour out to right half way down to a stream for a skinny dip with a waterfall - Nice). Down into Mickleden & back to car - 5,411 ft of ascent, 12,37 miles in 5hrs 26 minutes. [with] With Mya my faithful 13 year old Patterdale Terrier. [weather] Very warm day, sweated up to Col, breeze did help & clouded in a touch. - Set off at 7.37am after parking in NT car park at New dungeon Ghyll (£8.00 parking).

Andrew Johnson walked up on February 5th, 2020 [from/via/route] Old DG [with] Ted [weather] Cleared to blue skies at some points, Snow on top with some hail

Christine Shepherd climbed on April 25th, 2009 [from/via/route] Great Langdale using walk c371 [with] On my own [weather] Fine at first storms on the descent. - Climbed again on 20.6.19 while bagging Black Crags Langdale.

Elaine Evans bagged on September 13th, 2019 [from/via/route] From Seathwaite via Grains Gill to Esk Hause & Esk Pike, then to Rossett Pike via Ore Gap & Angle Tarn. Return via Langstrath to Stonethwaite. [with] Sue and Christine [weather] Wonderful walking weather fair with a cooling breeze. - Thank you to Sue's husband who moved the car from Seathwaite to Stonethwaite for us. Well done to Christine for also bagging Seathwaite Fell & Allen Crags.

Richard Marchant hiked on October 28th, 1993 [from/via/route] This was a walk carried out just by me from New Dungeon Ghyll & took me up Stickle Ghyll to Stickle Tarn up the back on to Langdale Pikes taking in both Pikes & on to Martcrag moor round to Rossett Pike & to Angle Tarn up to Ore Gap-Esk Pike-Bow Fell-Crinkle Crags-Great Knott- Pike of Blisco then back down to New Dungeon Ghyll. [with] On my own. [weather] Wet dull dreary day.

Dave Eyes bagged on April 18th, 2018 [from/via/route] Parked car at Old Dungeon Ghyl. Walked up valley & took the path by Rosset Gill - Climbed Rosset Pike then headed round to the right to eventually climbed Pike of Stickle & then Loft Crag before descending down to the path just behind the new dungeon ghyl pub. walked back to the car. [with] Christine Eyes [weather] Nice day - cloudy to start but mostly dry. Ended sunny. Good views.

Tracey Cowell walked up on May 4th, 2017 [with] Andrew foster and Anita gardiner [weather] Sunny but bloody freezing in the wind

Colin Egan climbed on April 7th, 2017 [from/via/route] From the NT car park by the Old Dungeon Ghyll hotel, via Mickleden & Rossett Gill [with] My wife Faith. [weather] Day started cloudy but the sun then started coming through, wind cold on summit. By the end of the day we had full sun. - This was our 204th Wainwright leaving us 10 to go & it fitted the bill perfectly. The path up Rossett Gill is testimate to the skill & ingenuity of the Lake District path builders. It is still a tough climb but they have so engineered it that you can follow it with confidence. Some might argue that it reduces the fells to a pavement but it stops us wandering here & there & making a mess of the fell side. The walk back along Mickleden in the late afternoon sun was magical. The pint at the Old Dungeon Ghyill was almost as good. Saw our first swallow of the year whilst enjoying our post walk drink. A very good end to a special week in the lakes.

Doug Martin summited on August 17th, 2016 [from/via/route] Shotley Bridge - Sty Head path to Intake wall then up onto Seathwaite Fell - path to Angle Tarn. Then retraced steps to Esk Hause where I met up with group. [with] solo [weather] One of the hottest days of the year so far. - Decent down Ruddy Gill was relentless.

Charlie Housley scaled on June 8th, 2016 [from/via/route] Along Mickleden from the ODG before heading along the path up by Rossett Gill. [with] Solo. [weather] Extremely humid; possibly 80-90%. Thunder storms within half a mile but not actually overhead.

Christina Lander bagged on April 23rd, 2015 [from/via/route] Old Dungeon Ghyll - Cumbria Way - Angle Tarn - Esk Hause (and beyond) - Angle Tarn - Rossett Pike - & back to Old Dungeon Ghyll along Cumbria Way [with] Dick [weather] A very hot & sunny day - Didn't start walking till 3pm as we got stuck on the motorway. Wanted to get as far as Scafell Pike but ran out of time & had to turn back.

Raymond Barnett summited on May 22nd, 2013 [from/via/route] langdale [with] self [weather] good & sunny

More Photographs & Pictures of views from, on or of Rossett Pike 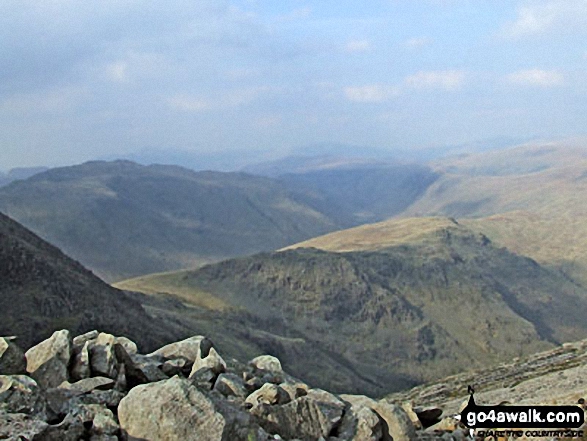 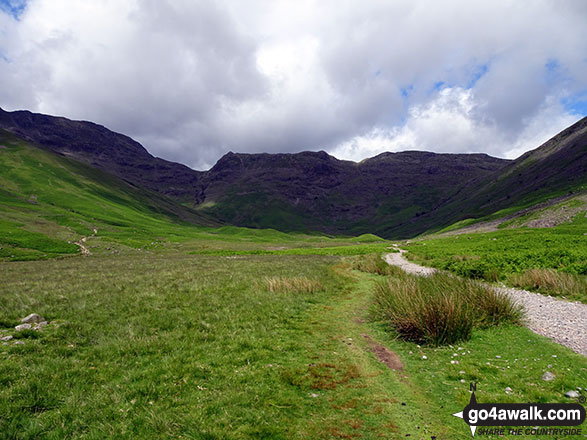 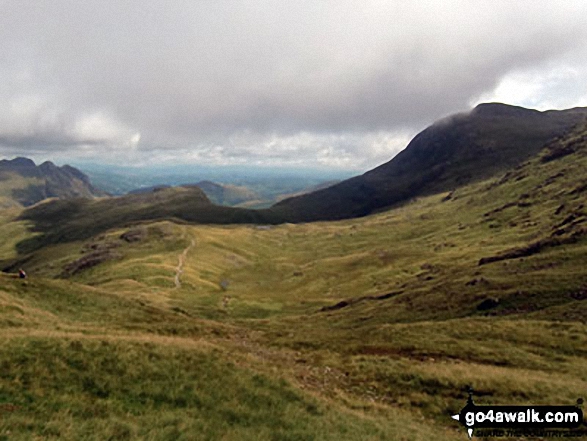 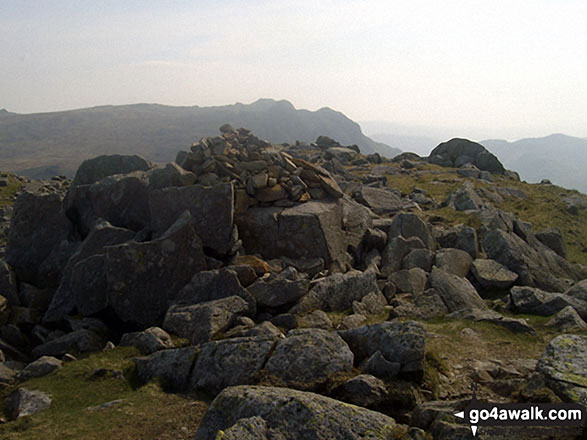 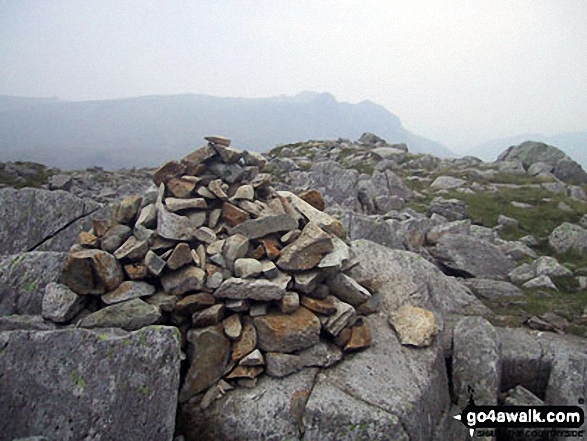 Rossett Pike summit cairn with The Langdale Pikes in the distance 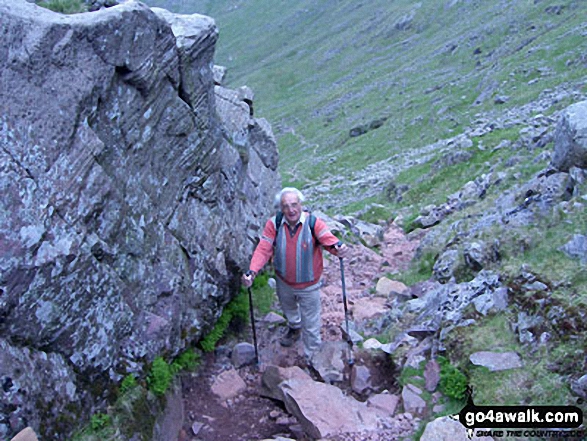 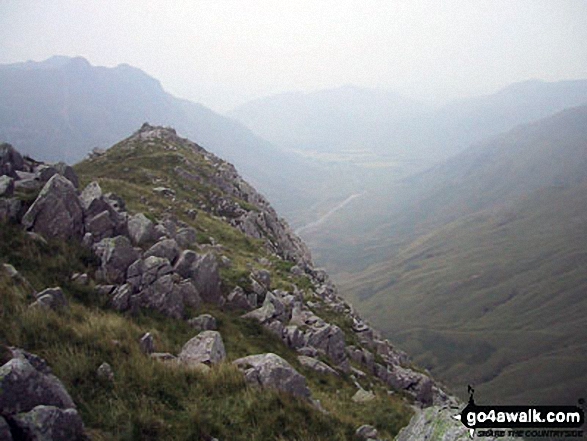 Send us your photographs and pictures on, of, or from Rossett Pike

If you would like to add your walk photographs and pictures featuring views from, on or of Rossett Pike to this page, please send them as email attachments (configured for any computer) along with your name to: