Stuck on An Stuc

One late spring afternoon a few years ago me and my little dog were out bagging some Munros at the eastern end of the Ben Lawers range when we came across the beetling lump of An Stuc. From the opposite hillside, on Meall Garbh, the slopes of An Stuc are, what can only be described as “scary”.

I had, however, read two guidebooks, neither of which mentioned anything much about any particular difficulties, apart from 'steep grass'. And it's often true that a hill’s appearance often flatters to deceive and many slopes which seem to be precipitous and dangerous, turn out to be nothing of the sort on closer acquaintance.

And so, I reached the bottom of An Stuc and got stuck in.

A couple were descending towards me. The one at the back was having problems and wobbled and hesitated and was helped down carefully by their partner.

Then I too came to a tricky bit. I sent the dog on up first. She scrabbled and with a helping hand, stood on a grassy ledge just above head height.

I scrabbled up behind with just enough room on the grassy ledge for tiptoes. Bits of the ledge were, disconcertingly, describing a graceful arc through the space below my feet and splattering on rocks somewhere far below.

I’d have to move on, quickly.

The next move seemed tricky too. I repeated the exercise, pushing the dog up first. She scrabbled a bit higher and was a good ten feet above me when she stopped.

I tried the move. Too hard. I called the dog down and she refused. I backed down on to tiptoes again. I tried to move further down and couldn’t.

I was stuck. On An Stuc. On tiptoes.

Twenty minutes of a lifetime passed. So, this was it. This was what it was like just before you blob off a hill. I didn’t want to find out about the next bit. I’d really have to move now.

I made one final, thrutchy, adrenalin-fuelled upwards lurch and balanced upwards, hands full of earth and grass. The dog moved up. We both now moved more easily, hearts racing, dry mouthed. (I’m not necessarily speaking for the dog here)

I’d come very close to having a disaster here. Was it a misjudgement to rely so much on a walk description in a guidebook? Maybe, but I’m not so sure.

Should I have taken more notice of the evidence before my eyes?

Out of several walk descriptions I read, only a few say that An Stuc’s east ridge is steep and dangerous and only one had had a similar experience to mine.

All the others just say to climb it – or descend it.

As an 'experienced' hillwalker, I’m supposed to use a bit of judgement on these things, but are 'beginners' just supposed to have nasty surprises?

Here’s a warning anyway - don’t just take what other people say about a hill or a ridge at face value. The writer may well have done the route many times and will think nothing about romping over the rocky bits with his hands in his pockets.

Its all too subjective. You’ll just have to use your own judgement and make your own decisions at the time.

Take nothing at face value. Ashen-faced gibbering wrecks coming the other way may well provide a clue, though . . . 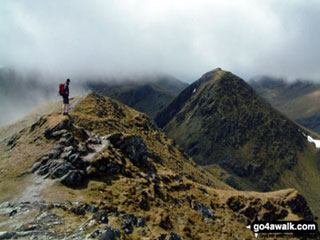 Looking onto An Stuc from Meall Garbh. Photo by Ronnie Clayes.

Note from the Editor: Any assessment of difficulty is always going to be subjective to some degree. However, go4awalk.com route guides do make specific mention of any steep ground and/or airy edges that need a good head for heights so that you have as much information about the terrain you'll encounter on the walk before you go. Our policy is that it is better to be wary and then discover it wasn't too bad after all than the other way round.

“My friend and I got into serious difficulties descending An Stuc towards Meall Garbh. I would regard this as a difficult scramble a 2 or 3. I think this is for experienced hill walkers and not to be underestimated. I don't think many of the guidebooks or forums highlight this enough.”

“I had a similar experience on An Stuc yesterday with my 13 year old son. Discretion being the better part of valour and not wanting to put my boy off hillwalking for life we agreed to return another day to complete An Stuc from the "more straight forward" approach from Ben Lawers. We will see.”

“An interesting account, Mike, and I'm glad it all turned out ok for you. It reminded me of my own encounter with An Stuc back in 2000 when I too found it quite challenging. All the best, Alan”