How to see a cloud sea - or Temperature Inversion

The Met Office have recently announced their prognostications for the winter of 2008/2009 and they’re saying that it will be a bit colder than 2007/2008.

Other weather commentators are saying that due to various things too complicated for me to explore here, the winter is likely to be much colder than normal, but fairly dry.

This is good news.

Many people will have entered in to walking since we last had a 'proper' cold winter (like wot we used to have when I were a lad) and many people will not have witnessed the sheer glory of walking along sunny ridges above a sea of fluffy white clouds, with hills sticking out like . . . er . . . things sticking out from a sea of fluffy white cloud - aka a Temperature Inversion.

Which is a shame.

This is something which you really must experience and something you’ll definitely want to repeat if you already have.

In these conditions, in the right place at the right time, the fog will stick in the valleys, trapped by a layer of warmer air up above. In the valley it will be cold and icy and, frankly, quite miserable.

As you climb up your hill, you will gradually become aware that things are starting to look a bit brighter.

Then, suddenly, you will pop out into bright, probably quite warm sunshine

You won’t want to go back down.

Watch out for those key words - High Pressure, Frost and Fog (though not hill fog, in which you will see nothing much at all!). 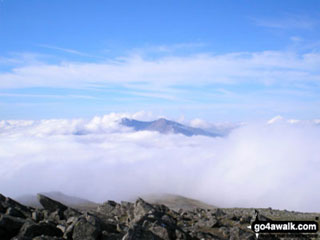 Glyder Fach and Glyder Fach poking out of a sea of clouds as seen from Carnedd Moel Siabod in the Snowdonia during a temperature inversion. Photo by Mike Knipe.

“This reminds me of one of my favourite walks ever. It was a February day in 2008. The mountain forecast said that visibility would be superb so I couldn't resist. I got up at 5:00am to drive for over three hours to walk from Ennerdale up Haycock. I had donned my thermals and set off to climb the frosty fells. By 10:00 I was above the clouds walking in bright sunshine and down to a short sleeved thermal t-shirt; coat and fleece stowed in by backpack. I was walking solo but met a group on Haycock who had walked up from Wasdale. It was wonderful, some people were throwing snowballs for their dogs to chase while asking if anyone had brought suncream! I then descended over steeple and into a Narnia like forest before walking beside Ennerdale back to the car just as the sun was setting. Magical!”

“I went up to Snowdon over the Christmas period to experiance a tempreture inversion... I was not dissapointed!”