In April 1964, many years before your time, obviously, me and about twenty other lads, and a portly Welsh bloke whose real role in life was to try to teach us English, assaulted the South ridge of that mighty prow, Pen-y-ghent.

All went well at first. We got to the steep, rocky bit and 'Teech' organised us into portering teams to relay our stupidly heavy rucksacks up onto the summit.

As the operation finally came to a close, a carelessly balanced rucksack teetered from its perch on the edge of the top crag and rolled, plunged and bounced down the slope, discharging its contents, some shattering or exploding on the boulders below, to the delight of most of class 1(b).

On investigation, I discovered to my shock and horror that the rucksack and its now well dispersed and damaged contents were . . . . mine.

By the time I'd collected all the debris together and carried it up to the trig point, the rest of the group had finished their lunch and were packing up.

I was given ten minutes to eat mine.

My pal had a picnic stove and a small portion of paraffin block, so I dug out my only source of food - a dangerously dented tin of spaghetti in tomato sauce, which I opened and placed carefully on the little yellow flame in the picnic stove.

After eight minutes, it was still cold, the paraffin block had burned away. I decided to eat anyway, but shuddering and boking at the shock of the cold, dead, slimy worms of spaghetti, I threw the mess over the wall in disgust and joined the queue of school chums at the stile.

“Knipe!?!” barked the teacher in Welsh. “Did you do that, boy?” - pointing at a slightly cross-eyed sheep wandering past with cold spaghetti in tomato sauce hanging off its horns. It was a Swaledale cross I believe.

Under instruction, I crushed the tin with a hefty boot and stuffed it into the drystone wall. A new skill learned. That's what you did in those days.

Whatever you do, don't do that now, eh?

You'd take it home with you now, wouldn't you?

It is probably still there.

As for decorating a sheep with spaghetti, well, I expect it was quite popular with its pals for a while. They're like that, the sheep on Pen-y-ghent. 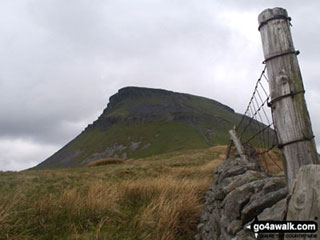 Pen-y-ghent from the Pennine Way on Fawcett Moor. Photo by Mike Knipe.