You may well not be very fond of peat.

Sloppy peat (and I apologise for using the technical jargon here) can suck you in and not spit you out. If it lets you go at all, it might keep your boots.

Some say that just below the surface of the Pennine Way lie the mummified remains of the bobble hats of generations of ramblers. Some say that these were planted as waymarks in an age when such selfless acts were commonplace. It’s not difficult, though, to blunder into a black midden of the UK’s worst walking surface.

And having so blundered – and initially innocent of the seriousness of your problem, you begin your first tentative movements towards self-extraction – say, when the peat reaches the thighs, and you may, at this point, mull over the fact that the average depth of peat in this country is about two metres, or about head height.

As your movements become more constrained during the losing battle with this clinging compost you would probably be amazed to know that it took around ten thousand years for two metres of peat to form. That this was a direct result of the post-ice age climate becoming cool and wet – a bit like it is just now, really – after an age when it had been much drier and warmer –a bit like its supposed to be in fifty years time, only warmer.

As your boots sink down into the murk and begin to tiptoe over the ancient glacial drift deep under the peat, they will have arrived at a place not seen by man for seven or eight thousand years, when birch and hazel forests finally succumbed to the unstoppable progress of sphagnum, bogwater and cold, driving sleet (brrrr).

Finally, as you taste the unmistakeably bland flavour of peat, and just before your hat becomes your memorial, you may wonder at the amount of carbon locked up in these blanket bogs – more than in all the forests in Britain and France put together – and still being stashed away by the mosses and heather of today’s moors.

Or you could just shout “help!” whilst you still can. 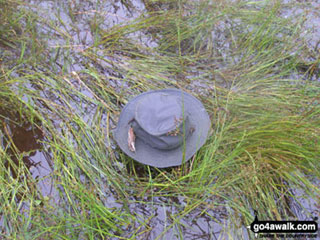 “Hee hee!! Last year my boyfriend and I did the Pennine Way. Setting out from Tan Hill Inn, after it had been raining all night, we had to navigate our way through lots of boggy ground. After coming to a particularly large expanse of bog, my boyfriend said to wait while he looked for an easier way round. Full of enthusiasm I had a look and with my very full pack on my back, from a standing start, didn't make the jump as I imagined in my head (I looked like wonder woman in my head, with a very smug look when I made it to the other side)!! Very cold, very wet, in the rain, I was stripped off (think King Lear as my shock set in and I started giggling) and a very patient boyfriend redressed me. My only comment was congrulating him on finding matching undies. The next 6 miles to Bowes were spent with me shivering and Dave trying his hardest not to laugh!!!! Thanks for rekindling the memories!!!”

“This time last year, half way 'round the Edale Horseshoe with my son. After donning gaiters, I thought I'd make up some time (up until then I had been dodging the worst of it). I sank up to the waist within yards and had to be yanked out by my son and a helpful passer by! What fun.”

“Brought back chilling memories. About ten years ago, six miles into a ten mile circular walk over and around Winter Hill in Lancashire, I went up to my midriff in the black stuff and my feet hadn't touched the bottom. Instinctively, I turned around to pull myself out, rather than going forward and into more trouble. Had to march four more miles to get back to the car where I luckily had spare clothes - otherwise I'd have driven home naked! Scary thing is that I was on my own, so had I not surfaced, the police would've found my car in Tockholes Car Park and never known what happened!”