Walking in the Footsteps of Beatrix Potter

On the trail of Peter Rabbit, Mrs Tiggy-Winkle and Jemima Puddleduck 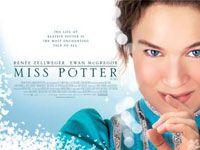 The movie film Miss Potter, starring Renee Zellweger and Ewan McGregor, tells the engaging story of the life of Beatrix Potter chronicling her career as an author of children's books and as a conservationist.

Beatrix Potter was born in 1866, into a relatively well-to-do 19th century middle-class family in Kensington, London.

During her childhood she developed an interest in drawing animals and plants before starting to write at about 15 years of age. Her professional writing aspirations were encouraged by a cleric, Canon Hardwicke Rawnsley, whom she met during a long, family summer holiday in the Lake District. Rawnsley was himself an established writer and also a pioneering environmentalist who was one of the founders of the National Trust.

He tried to help Beatrix find a publisher for her first book about a small rabbit. This was initially without success. So Beatrix herself published the first version of Peter Rabbit in 1901. The following year, 1902, Norman Warne (one of the first publishers approached) did relent and publish The Tale of Peter Rabbit - so starting the publishing and merchandising phenomenon that is Beatrix Potter.

She maintained her strong connections with the Lake District, owning both property and land which she farmed using traditional methods, until her death in 1943.

To walk in the footsteps of Peter Rabbit, Mrs Tiggy-Winkle, Jemima Puddleduck and visit the cottage where Beatrix Potter wrote many of her famous children's books - see walks:

° The Wainwrights in The Lake District

° The Definitive Guide to Walking the Lake District

° Walk in the Footsteps of Beatrix Potter

° Walk the 3000ft Mountains in England

° Walk the 3000ft Mountains in Scotland

° Walking on The Isle of Skye and Lochalsh