Raven Crag (Thirlmere) is classified as: 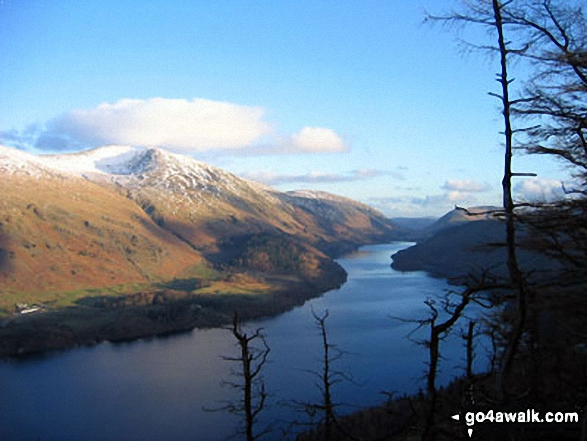 The view from the summit of Raven Crag (Thirlmere)

You can find Raven Crag (Thirlmere) & all the walks that climb it on these unique free-to-access Interactive Walk Planning Maps: (click/TAP to select) 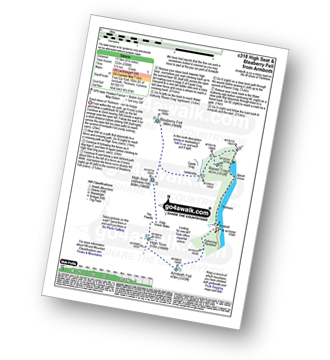 Richard Marchant summited on September 7th, 2021 [from/via/route] Route taken as per map C318, I Started from Armboth car park & then walked through Fishercrag Plantation up on to Armboth Fell then traversed across to High Tove followed by High Seat where I had a spot of lunch then proceeded on to Bleaberry after which I back tracked & made my back down south of Iron Crag & picked up a forest track which led me to a path coming off to ascend Raven Crag. Last one for the day so it was back down the path to the road on the West side of Thirlmere & that was followed back to the car park. [with] Just myself [weather] Dry & fine weather. - Another simply awesome morning out in the Lakes

Clare Tait scaled on July 27th, 2021 [from/via/route] From Armboth car park taking in High Tove, High Seat, Bleaberry Fell & Raven Crag [with] Charlie [weather] Warm, overcast. Some gaps in the cloud. - No 65- 69 Wainwrights & will log all together. As the weather had remained warm there was no issue with bog! Just soft walking. A new path of huge stone blocks solved the issue around High Seat where the bog had obviously been boggiest. A good walk & five Wainwrights bagged.

Nick Dobson walked up on June 19th, 2021 [from/via/route] Armboth car park Thirlmere [with] Margaret. Ralph & Kate [weather] Another hot sunny day with excellent visibility - With Kate here today we decided to do the smallest of the 36 remaining Wainwrights as this was just her 9th completed. They include the Old Man of Coniston & Helvellyn of which she has down twice via both Striding Edge & Swirrell Edge. We have just 35 to go now.

Wayne Baxter summited on April 24th, 2021 [from/via/route] From the Armboth car park follow a good path up Cockrigg crags to the end of the woods on your left, follow a path that's turns left to Armboth Fell. Follow the path to High Tove, a narrow path will lead you away from to your right from High Tove. Follow this path difficult to see for a while but head to Low Bank & a gate. Turn right on a good track, head to castle crag fort & turn right up to Raven Crag. Return to Castle cragg & turn right leading to the road. Follow road to car park. [with] Sue [weather] Sunny

Christine Shepherd conquered on October 4th, 2009 [from/via/route] Used walk c318 from Armboth [with] On my own [weather] Cloudy but some good views - This was the last peak of a great day's walking so I sat around for a while enjoying the wonderful view over Thirlmere. Repeated walk 318 on 21.04.2021 adding Walla Crag. Unfortunately, I broke my arm crossing the stream before climbing this fell but still enjoyed the views.

Richard Fulcher scaled on April 19th, 2021 [from/via/route] Circular walk from car parked on A591. Armboth up to High Tove (I walked across to Armboth Fell & back to High Tove), over the boggy terrain to High Seat. Complicated & difficult walk across woods & up to Raven Crag via a huge ravine, a high ladder stile & along a track. Back down to Thirlmere & back to the car. [with] Jen (except Armboth Fell) [weather] Beautiful sunny day with very little wind ... a slight chill at times. - The whole walk was 7.8 miles for Jen & 9.2 for me.

Andrew Douthwaite conquered on June 7th, 2020 [from/via/route] c318 [with] Hannah [weather] Cloudy with some sun - "Might be boggy" - it is when you get a bit lost...and keep well to the right of Castle Crag to a void a scramble down.

Dave Eyes summited on April 25th, 2019 [from/via/route] Parked at Armboth Carpark on the side of Thirlmere . walked up Fisher Gill path to Armboth crag then continued to visit High Tove cairn. We returned back across the bogland & headed north to skirt the forrest & eventually visit the top of Raven Crag. we returned by the same route. [with] Christine Eyes, Jenny Eyes, Dave Kennedy [weather] Nice day - cloudy to start but mostly dry. Ended sunny. Good views from Raven Crag.

Chris Sheard bagged on September 20th, 2017 [from/via/route] Down from High Seat & along in front of imposing Castle crag through slightly wet catchment up to a switch over onto other side of valley. Along forestry Track & up a number of steep steps. Fantastic view from top [with] George [weather] Started in light rain which reduced misty on top with to light blustery showers with broken sun - Very steep up & nice circuit - glad we took own view on weather

Anthony Scott summited on March 8th, 2017 [from/via/route] Armboth car park (free at the moment) [with] me [weather] 7 degrees, grey cloud at start but turned into a beautiful, blue sky day & 11 degrees. - Walk 318. Need wellies for this one! So boggy

Elaine Evans hiked on September 11th, 2014 [from/via/route] From Bleaberry Fell [with] Sue [weather] Warm & dry with sunny spells - Either we strayed from route or it was not as route stated. Quite a steep descent from Bleaberry Fell to stream the way we walked but did manage to find the ladder stile. Walk from Raven Crag back to car was on a little used path with overgrown bracken. Not suitable for those who like well defined paths.

Doug Martin bagged on July 19th, 2006 [from/via/route] Parked just off dam & straight up through woods. [with] Brampton Fellwalkers [weather] Clear blue skies - scorcher. - Remember this well - we climbed slowly due to high temps & once on Crag decision taken not to do walk as planned as too hot. We had a very lazy day lying in the grass longer than usual.

Tim Buckley hiked on August 24th, 2013 [from/via/route] Arrived at 3.50pm from Bleaberry Fell, no marked footpath, through a large deer fence. [with] Solo walk. [weather] Had been dull but was now improving. - My last Central Fell & 65th Wainwright, great views along Thirlmere & down to the damn. Forestry contractors had made a mess of the footpath's around here so way finding on the way down was not easy - went wrong & had to re-trace my steps.

Bill Rowlands summited on May 20th, 2013 [from/via/route] Car park, north end of Thirlmere. [with] Beth Rowlands and Jake the chocolate lab. [weather] Cloudy but stayed dry - Lots of logging work going on which has opened up the final approach to the summit. Went past the same area last year & it has completely changed.

Charlie Housley conquered on February 28th, 2013 [from/via/route] Shoulthwaite Farm. [with] My faithful walking companion, Jo; my wife. [weather] Wonderful, clear blue sky & a hard frost. - This has to be one of the best views of any Wainwright that we have ever done.

More Photographs & Pictures of views from, on or of Raven Crag (Thirlmere) 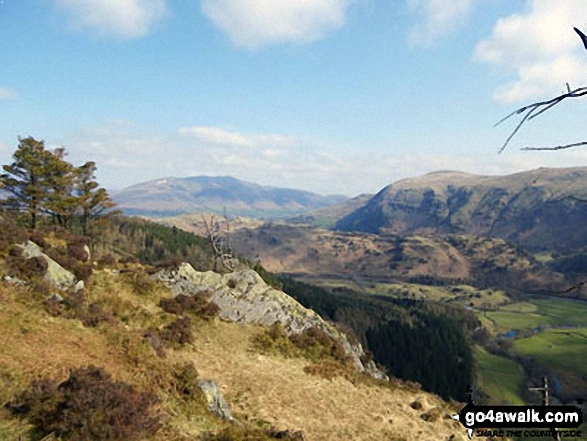 Blencathra or Saddleback (left, in the distance) and Clough Head (right) above Legburthwaite from Raven Crag (Thirlmere) 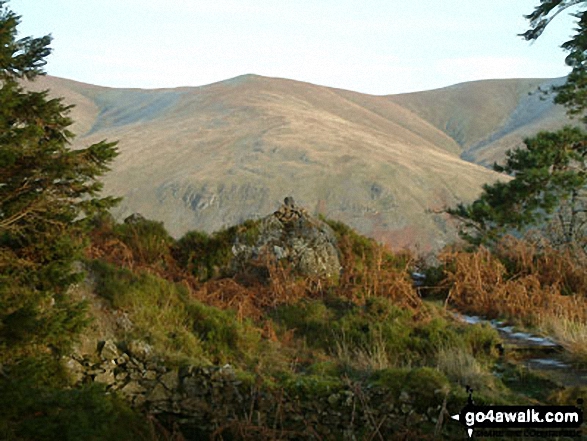 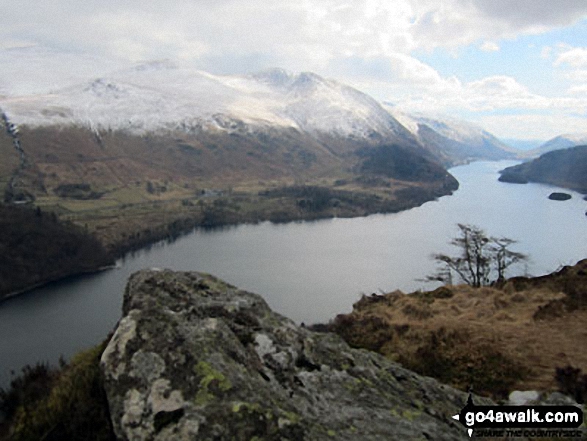 Thirlmere and a snowy Helvellyn range from Raven Crag (Thirlmere) 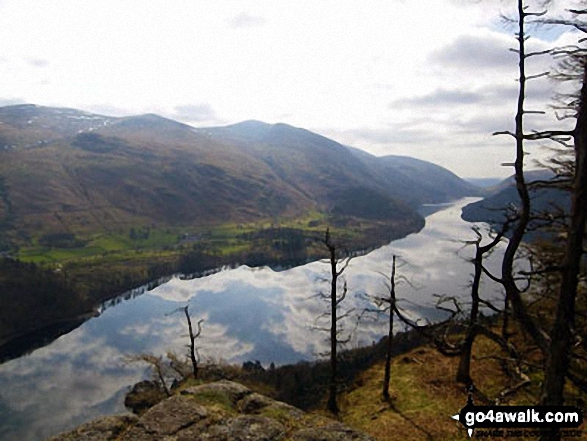 Send us your photographs and pictures on, of, or from Raven Crag (Thirlmere)

If you would like to add your walk photographs and pictures featuring views from, on or of Raven Crag (Thirlmere) to this page, please send them as email attachments (configured for any computer) along with your name to: