About Walking & Hiking in Italy 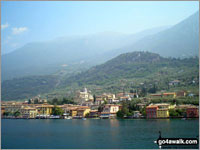 Walking in Italy offers some fantastic terrain to explore - and one of the most spectacular areas is around Lake Garda. At 370 sq. kms, Lake Garda is Italy's largest lake and is surrounded by the mountains of Lombardy (Lombardia), The Veneto (Venetia) and Trentino - Alto Adige.

The terrain is varied - in the south it has a distinctly mediterranean feel whilst at its northern extreme it more resembles a Norwegian fjord.

The best season for walking around Lake Garda depends upon the altitude at which you want to walk. The summit regions are usually only free of snow from the middle of June until November.

In contrast, walking around the Lake is only comfortable in the cooler times of year such as the snow-free Winter. Routes in the middle areas such as those close to the haymeadows and Alpine pastures are at their most beautiful between May and October.

Ascents around the southern shores should be avoided in high summer because of the extreme heat.

What to Wear & What to Take for walking in Italy

As with hill-walking in the UK, you need good walking boots. Walking poles may be useful particularly for some descents. The key consideration is to make sure you have both rain and sun protection and enough drinking water to avoid dehydration.

Ways and markings on Italian footpaths and trails

The footpaths around the southern areas of Lake Garda are often not very well marked. You will find many different marking systems and systematic preservation work is rare. Footpaths are changed frequently because of private building work. You are not allowed to across private property - even if there was once a footpath there.

By contrast the footpaths in the more mountainous areas at the northern end of the Lake are generally more clearly marked.

› About Walking in Italy

› Walking in Italy - some useful Italian Words and Vocabulary