The Mountains, Peaks, Tops and Hills in England, Scotland and Wales starting with U 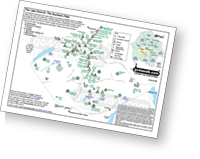